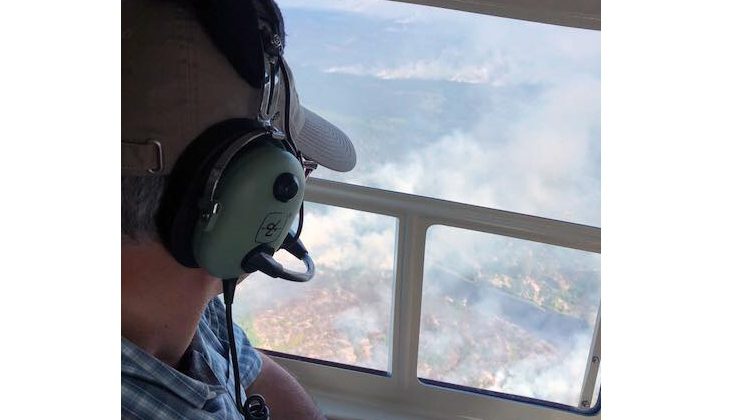 Tony Clement has gotten a firsthand look at the forest fire burning near Henvey Inlet.

The Parry Sound-Muskoka MP took to the skies in a helicopter to tour the region affected by Parry Sound 33 today.

Beforehand, Clement met with first responders and community leaders who are on the front lines of battling the massive blaze. Clement took off from the Ministry of Natural Resources and Forestry base camp at Britt. That’s where operations battling Parry Sound 33 are centralized.

In a release, Clement said “The efforts of all those on the front lines of this massive fire are truly awe-inspiring. These men and women are working tirelessly and around the clock to not only fight the fire, but help the people who have had their lives disrupted. They are truly the heroes behind the scenes.”

After the helicopter tour he went to the French River Provincial Park Visitors Centre, where the OPP and MNRF joint command post is. Clement was given a briefing there on the efforts to keep the public and local residents out of its path.

“Alongside the police, firefighters and community leaders, so many Parry Sounders and people living across the region have pitched in to help with volunteer hours, food and donations. It has been heartening to see the display of humanity in this time of crisis. I also know Parry Sound is ramping up for the coming long weekend, and businesses are sending a message that they are open and ready to welcome visitors,” said Clement. “Also of importance is a massive fire ban remains in place across the Parry Sound region, which includes fireworks. Officials are asking everyone to heed the ban.”