Cyclist crossing Canada for the YMCA stops in Parry Sound 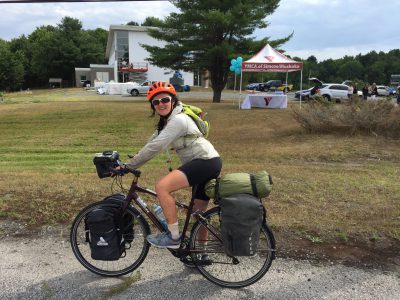 A 26-year old Barrie woman cycling across Canada to raise money for the YMCA of Simcoe/Muskoka stopped in Parry Sound this morning. Madeline Lawler says she chose to help the YMCA because of their inclusiveness:

The money raised will help the YMCA provide memberships to those who otherwise could not afford its programs. Lawler says in addition to supporting the YMCA, she also wants to inspire others, regardless of their gender or background to get on a bike. Lawler says she chose to stop in Parry Sound to see one of the locations her Ride Across Canada is helping:

Lawler has cycled 5,000 kilometres since she started her ride in Vancouver in May. She still has 2,000 kilometres to go until she finishes her ride in Halifax. She will be biking through Rosseau, Algonquin Park and Lake of Bays before heading to Quebec.  Her goal is to raise $6,000, you can learn more and contribute to Lawler’s Ride here.