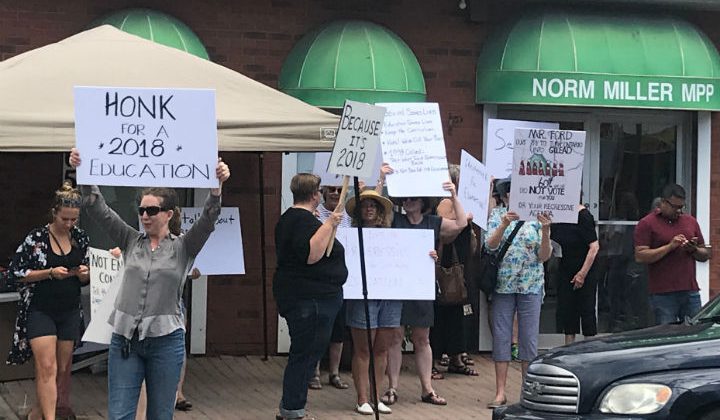 About fifty men and women gathered outside of Parry Sound Muskoka MPP Norm Miller’s Bracebridge local office to voice their concerns over the recent decision by the Doug Ford PC government to revert to the sex education plan that was in place prior to the 2015 update by former Liberal leader Kathleen Wynne’s party.

The group crossed the spectrum of young and old, men and women, along with transgender, gay and lesbian participants.

The message was clear. Leave the sex ed teaching program as it is.

Amy Dahl of Huntsville went to school in Alberta and she says she was there on behalf of Ontario students.

“I was educated out west and being an advocate for evidence-based education is why I am here,” said Dahl.

Organizer of the protest Michelle Emson says it is clear a large number of Ontarians are not happy with the change based on the protests she is seeing across the province over this issue.

It is unclear what path protestors can take to undo this decision other than putting pressure on the newly elected government.  There will not be a vote or bill introduced surrounding this issue that would give protesters a meaningful target to rally around.

Protester Sydney Armstrong was taught the old program and she states it bluntly, It was not good enough.

One of the main issues with the 1998 to 2014 based sex education plan was that in 1998 gay marriage was illegal, there was no such thing as sexting, smartphones or cyber-bullying, not to mention the various gender identities that have become commonplace. Protesters are calling for a modernized approach and welcome consultation with educators and parents.

Emson said she invited Miller to attend and was told he would not be able to, but she also declared there was an ongoing conversation happening with long-serving MP.