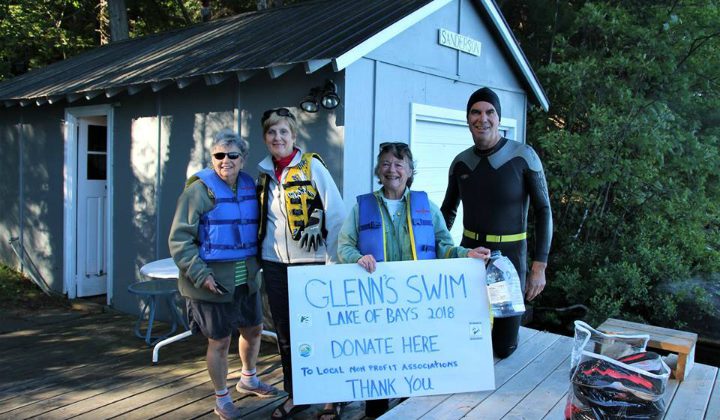 Glenn Vickery - right - has been swimming continually around the perimeter of Lake of Bays. Here was his departure day in May. Jacqueline Godard photo. 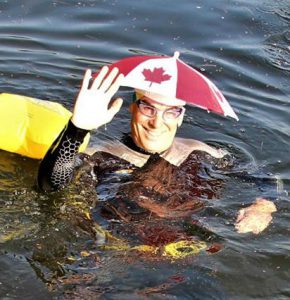 With an eye to maintaining the pristine lake conditions now being enjoyed by residents around Lake of Bays and Lake of Bays Township, resident swim enthusiast Glenn Vickery is attempting to swim the perimeter of the body of water by the beginning of  August.

It was late May when he departed the South Portage public dock with chilly temperatures of 9 degrees in the water. Now with much warmer conditions, he has already swum 110 kilometres as of Canada Day.

Vickery says he is swimming to bring attention to the Lake of Bays Shoreline Preservation project. He doesn’t have an issue with the current condition of the water residents drink and play in, but he wants it to stay that way for future generations:

The days he swims have him in the water for up to three hours with goggles looking at the bottom of the lake.  He has seen some interesting things:

He says the support from residents around the lake and his logistics team, led by his wife Arlee, has been fantastic. She has paddled her kayak every stroke of the way with him and keeps him on track when folks want him to enjoy a beverage or burger at the many dock parties he swims by:

Vickery is planning to arrive back at the public dock of Lake of Bay Townships near Dwight, on the August holiday Monday.  You can follow Glenn’s journey on Facebook.  You can donate to the Andrew Daniels Stewardship Foundation at its website.