HOUSING AND THE LOCAL ECONOMY DOMINATE THE ALL-CANDIDATES DEBATE 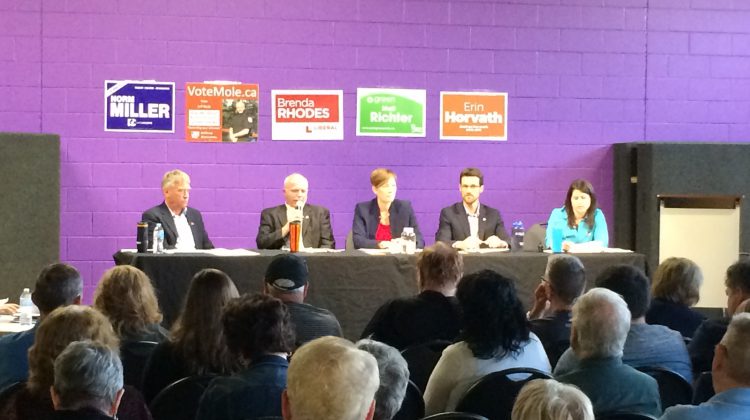 Local candidates gathered for their first debate in Parry Sound at The Sound Community Hub. The affordability of housing, the issue of finding stable employment and the local economy dominated the discussion.

The first part of the discussion centered around millennials buying their first home. PC incumbent candidate Norm Miller says, we need to address the cost of building homes, it can be up to 140 thousand dollars in regulatory cost. He added, there are predictions that there will be a million skilled jobs unfulfilled, we need to get the people the skills so they can afford to buy a home. Independent candidate Jeff Mole says he’s a fan of the not-for-profit community-funded model, we need to create the housing that young people can afford so they can come to the community, It’s not working expecting them to live on minimum wage and not having an affordable place to live. Liberal candidate Brenda Rhodes says we need to look at new ways and capitalize on programs available. NDP candidate Erin Horvath says, we have committed to affordable and suitable homes and working with municipalities, to ensure there are options for people, ensuring there are a certain number of affordable units in each build. Green candidate Matt Richter says we need to make sure there is a proper mechanism so we can give financial incentives for the developers and bring first-time home buyers to live here.

There was also much discussion on small business. Miller says small businesses are the job creators especially in Parry Sound-Muskoka, citing Bill 148, he says he doesn’t know how small business can survive with the burden that’s put on them. Rhodes says she believes the minimum wage increase should have been done differently, she heard from small businesses that they were not against the minimum wage increase, but the way it was done. Richter says we are the one party who is advocating to lower payroll taxes by reversing the 1% corporate tax given to mega-corporations, that would give cash relief now. Mole says we’ve allowed corporations to ruin our environment and not pay a living wage by relying on the private sector way too much, we need to build up a stronger community enterprise centre. Horvath says broadband expansion and reviving the Northland rail service will make a big difference. She also called for protecting small and medium business tax rate and, fostering innovation hubs.

The debate built to concluding comments from all candidates. Rhodes called for the disillusionment and mistrust to change, saying she would tirelessly listen, stating in Ontario we do not want Trump-like politics. Horvath said a vote for Miller is a vote for Doug Ford. Miller says Parry Sound-Muskoka can do a lot better than it has for the last 15 years. Mole says his hope is that he has inspired communities to see a different way of looking at the economy. Richter called on voters to elect the first Green.