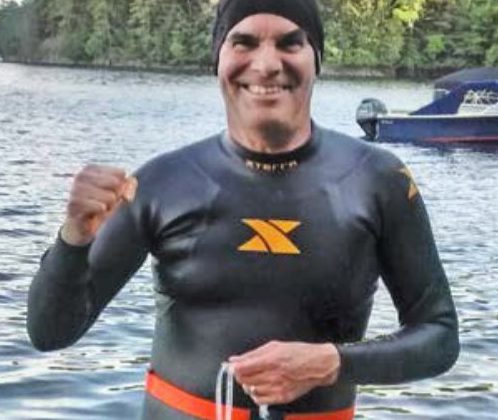 A Muskoka man is putting his swimming experience to the test to support local shoreline preservation.

Glenn Vickery will be kicking off a 210 kilometre swim along the Lake of Bays shoreline this Saturday at South Portage. Vickery says he will be covering the distance in increments of about five to eight kilometres. He says the training has been rigorous.

Vickery says he feels very strongly about the preservation of the Lake of Bays waterway as it is a crucial point in Muskoka, feeding into the watershed from the Algonquin area.

Vickery has spent his entire life swimming, starting at age eight and competing in challenges in Canada, the US and internationally. His wife and supporter Arlee is usually there beside him in a kayak making sure he gets to the finish. She says she’s made sure her husband is prepared for the cold lake water.

The first leg, which is expected to be done in six swims, will take him to Baysville. The next leg takes him to Dorset in July, then to Dwight and finally back to South Portage by mid-August at the latest. Vickery says everyone is invited to stop by South Potage Public Boat Launch at 9:30am for a ribbon-cutting before he takes the plunge. Anyone interested is also invited to cheer him on or even swim alongside him anytime during his challenge.

Vickery is partnering with the Andrew Daniels Fish Stewardship Foundation, Friends of Muskoka Watershed and Lake of Bays Heritage Foundation as part of this awareness campaign. Vickery will also be collecting donations for these three non-profit groups. You can follow Vickery’s journey on the Lake of Bays Shoreline Preservation Project Facebook page or on his Instagram.