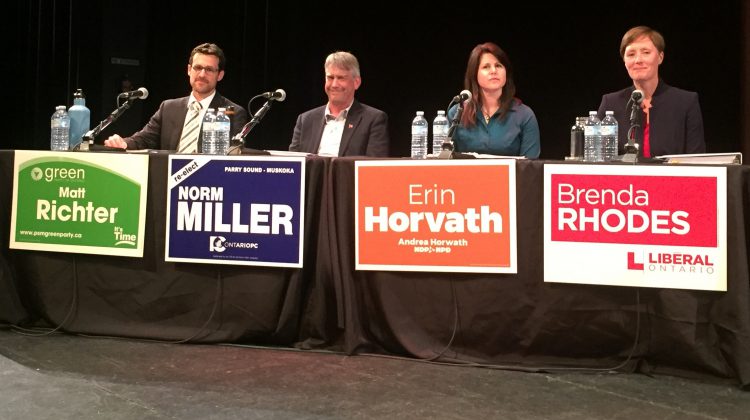 Parry Sound-Muskoka’s candidates are tackling some big issues ahead of the provincial election.
PC incumbent candidate Norm Miller, Liberal candidate Brenda Rhodes, Green candidate Matt Richter and NDP candidate Erin Horvath were all at the Gravenhurst Opera House Tuesday night for the first of three debates being hosted by Muskoka’s chambers this month.

One topic which managed to creep up most often was the ongoing stress over Muskoka’s healthcare system and the future of the two hospital sites. Rhodes accused Miller of only showing an interest in the topic when election time came up. Miller fired back saying he was involved in various rallies and community outreach to garner more support for hospital funding. He said lack of provincial funding has forced the hospital board to make cuts. Richter said the Muskoka Algonquin Healthcare board was dealt a tough hand and Muskoka needs to look to the province for more funding. Horvath asked Miller why he wasn’t able to wrangle action despite his years of work on the issue. She went on to say the NDP is committed to a funding formula to support rural hospitals and supports two hospitals in Muskoka. Each of the party members agreed two sites were best.

When asked about Long-Term Care all the candidates spoke about the need for more beds. Miller says the province currently has over 32,000 people on a wait list for long-term care beds and the Ontario Tories are promising 13,000 beds within the next five years. Horvath said the NDP would allocate 40,000 beds with 15,000 them new and would increase funding for a minimum of four hours of long-term care for seniors. She said the PC party has no concrete cost formula to back up their promises for care funding. Rhodes said if the Liberals stay in power they would bring 130,000 long-term beds to Ontario as part of a 10-year plan and she would advocate getting some of those beds in Muskoka. Richter said funding is definitely needed, but the province needs to have a plan in place to back up the promises.

Candidates were questioned how they would push to make the Muskoka Airport in Gravenhurst an economic benefit to the community. Rhodes pointed to her experience working with the Bracebridge Chamber of Commerce and partnering with RTO12 to bring commercial flights to the airport. Miller said the airport has a lot of potential, but it needs government funding to support further development. Richter said Muskoka Airport is pivotal for tourism, but so is rail service. Horvath said the NDP is committed to the reintroduction of passenger rail in the north. Miller said the PCs are committed to the same goal for northern passenger rail service.

The candidates were also questioned about more local matters like the future of the Muskoka Regional Centre site, affordable housing, fair wages and hydro costs. The next debate will be held at the Algonquin Theatre in Huntsville on Thursday night starting at 7.