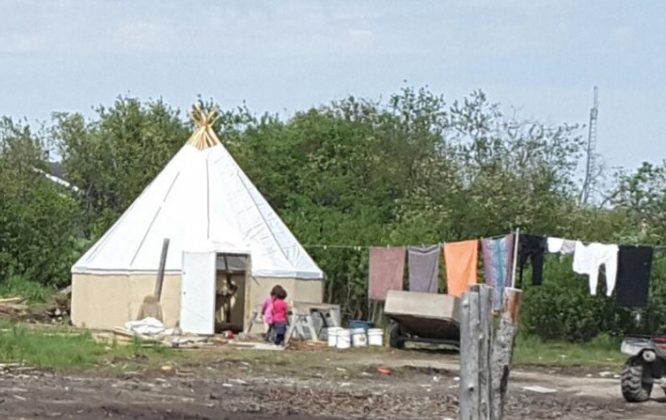 A month in a remote Northern Ontario First Nations community, and an idea was born. Huntsville author David Franks wrote a book entitled “30 Days in Attawapiskat”, which he describes as a combination of diary entries during his trip to the reserve. The remote community is on James Bay about 1,000 kilometres north of Toronto, and is only accessible by plane or ice road in the winter. Franks is now selling copies of his book to help raise money to build a greenhouse for the reserve.

Franks has been to the community of around 1,500 people twice, saying he wanted to go after Stephen Harper’s apology to former students of residential schools back in 2008. Although the First Nations reserve had been in the news for around 30 years prior to that, Franks says he started listening more closely after that statement from the former Prime Minister.

Since 2008, four states of emergency have been declared. Once in 2009 for sewage contamination; again in 2011 for a severe housing shortage where residents lived in unheated trailers or tents; in 2013 for more flooding and sewage backups which forced people off of the reserve; and finally in 2016 following a rash of suicide attempts. Franks said he was left wondering what hasn’t happened up there in terms of government support, and thinking maybe Canadians can do something instead.

So, he started looking into it. And through his research, Franks says he found a community greenhouse was wanted and needed. He says the idea came from a poster board at the community centre, done by the youth. It said ” We Want…” at the top, and underneath many ideas were listed; bowling alleys, youth centres, movie theatres, and eventually a community greenhouse. Franks said that option made the most sense as fresh food is about four times more expensive in Attawapiskat than it is in the Muskoka area. With global warming and climate change, Franks says the winter road access is diminishing every year. What used to be six months has gone down to six weeks, contributing to the increase in food prices.

More than that, Franks says fresh food means your health improves, extra light helps to offset depression, and nurturing skills are good because that aspect of their culture was taken when parents lost their kids to residential schools. He says they didn’t learn how to look after their children, passed that down to the next generation, and maybe nurturing plants will help bring some of that back.

Franks was most recently in Attawapiskat in January, saying he wanted to see the worst conditions the winter had to offer so he could plan for the greenhouse. And, the weather didn’t disappoint, dropping down to minus 50 with the windchill. He says it was excessively cold and changed his opinion of what type of greenhouse the community could use if they wanted to grow food year-round because heat would have to be produced inside.

Franks says Attawapiskat is very windy, so wind turbines are a natural power producer for that. And, he says you can combine that with heated wire mesh under the floor tiles.

He says the current Chief of Attawapiskat wants to put the greenhouse on Potato Island, which is in the Attawapiskat River with no power, sanitation or water. Franks says that’s a challenge, but one he has taken to heart and figured out a few ways it can be done. He says they will make the community greenhouse small enough that it can be built quickly and easily by the community, so more than one can be built and the information can be shared with other reserves. That way, he says they aren’t just building a massive greenhouse and then walking away from it.

The next step to turning the idea into reality happens this summer. Franks says he’ll go back up in July or August to give a presentation to the Chief and council about the plan and, assuming it gets approved, the project will move forward. But, he can’t do it alone. Franks says he needs some professionals to help him with this task, including a technology expert, an architect or an engineer.

When it comes to the biggest lesson Franks learned throughout this process so far, he says it’s the fact that the kind of poverty Attawapiskat deals with still exists in Canada. He calls it shocking, and says something must be done.

You can buy an e-copy of 30 Days in Attawapiskat on Indigo, a print copy on Amazon, or at any of Frank’s public appearances. The next is set for the Bancroft Public Library on April 28th at 2:00pm. Half of the proceeds from the book sales will go into funding the greenhouse project, or you can donate to the cause on the Go Fund Me page. A copy of the the book 30 Days in Attawapiskat.