March 25th to be named ‘Huntsville Day’ in Muskoka 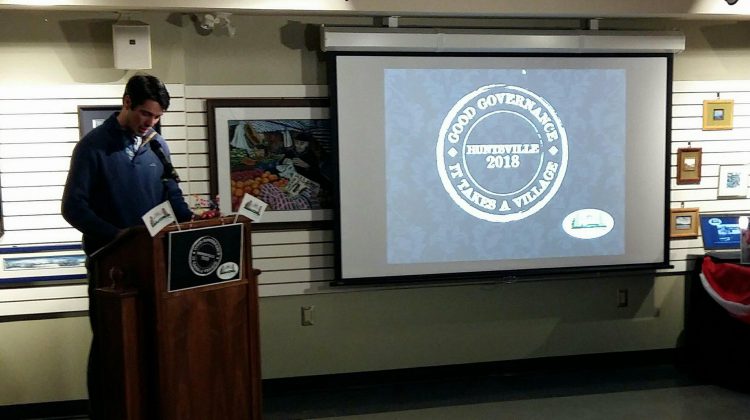 Dozens of locals gathered in anticipation Sunday afternoon to hear what news was in-store for Huntsville.

The town held an invitation-only event where it was said an announcement would be made. Held in the Partner’s Hall at the Algonquin theatre in downtown Huntsville, people gathered in a room filled with vendors’ booths, food and drinks waiting to hear what the news would be.

Councillor Jonathan Wiebe took to the podium a little after 2 p.m. proclaiming that March 25th will be recognized as Huntsville Day in Muskoka.

Wiebe said that that each year will revolve around a different theme. This year’s theme was announced as “Good Governance: It Takes a Village” saying this will be a way to honour the 750 hardy individuals that formed to incorporate Huntsville into a Village in 1886.

Administrators say they encourage businesses to incorporate the theme into their activities and events for the remainder of 2018. He says this with this being an election year, locals will benefit from some old-fashioned policy and issue-debate politics.

It was reported that the idea behind having an annual theme for Huntsville is to pull cottage country and its people together through community engagement projects throughout the year. The town said that themes will be based on local or world history as well as current events.

Wiebe ended his speech by saying he looks forward to having fun with the new idea, and that he is excited to do it all over again in 2019 hoping the community will join.