Muskokans want to keep the beauty of Santa’s Village Road 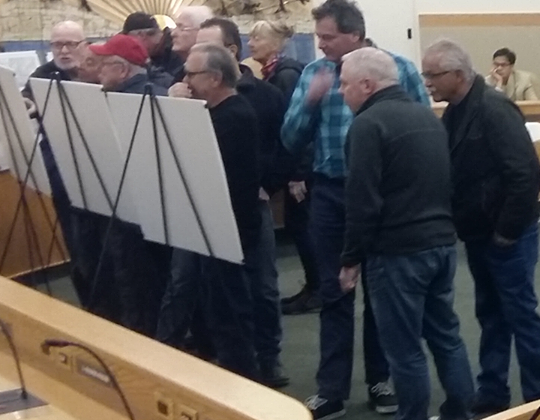 Residents get a glimpse of what's in store for Santa's Village Road, public meeting held at the District of Muskoka, March 22, 2018. Photo by Julie Pierias/99.5 The Moose/Vista Radio

Town officials and residents are speaking up about Santa’s Village Road. On Thursday night, The District of Muskoka hosted a public meeting to hear from people who live on or near the road and what their concerns are when it comes to future construction plans. Administrators say there’s a need to improve road surface and road base on Santa’s Village Road as well as enhance drainage, fix erosion problems, and pinpoint transportation concerns.

Commissioner of Engineering and Public Works Fred Jahn says the intent of these meetings is to collect input from locals verbally, or through collective officials. He took to the podium to explain that Santa’s Village Road is a popular road and that it’s important to accommodate those using it. He also said that he wanted to make it clear that there will be one-on-one meetings with residents who are affected, and that these meetings are a big part of the resolution. He also continued to remind those attending that he wants this project to be fair to local taxpayers.

Officials say the safety of the road is a priority. It was said that this project is part of the OPP Safe Roads Campaign, and that adding discussing lowering speed limits on the road as well as re-painting lines that would better separate traffic from the shoulder. It was also said by the public works planning committee that access to water gaps and guard rails will be provided for existing walkways, docks, boathouses, and cottages.

Director of Transportation, Engineering, and Solid Waste, Michelle Hendry explained that access to all properties will be maintained so that people can get in and out of their driveway. She explained that they will give  48 hours notice if and when their driveway will be obstructed. She also said that garbage collection schedules would not be affected. Hendy continued to explain that the construction would take place weekdays starting at 7:00 a.m. and ending around 6:00 p.m. and that residents will receive a letter outlining all necessary information. It was also said that there will be no full road closure on Santa’s Village Road saying it’s important that people get to where they need to go.

After hearing the plans from officials, over a dozen people went to the mic during questions and answer period to voice their concerns. The majority of speakers expressed their opinions about tree removal after hearing over 200 trees would need to be cut down.  Moose FM was at the meeting to hear what some of the concerns from the community are.

Administrators say they will be using this public feedback to help make a final plan, but locals say there’s more work to be done before getting back to the drawing board.

Preparation for construction is said to start Thanksgiving weekend and officials say they hope the project will be completed by 2020.

This was the third public meeting that locals have attended to see what’s going on with the road’s construction plans.

To read more about the construction project, click here.