District of Muskoka looking at an affordable housing proposal in Huntsville 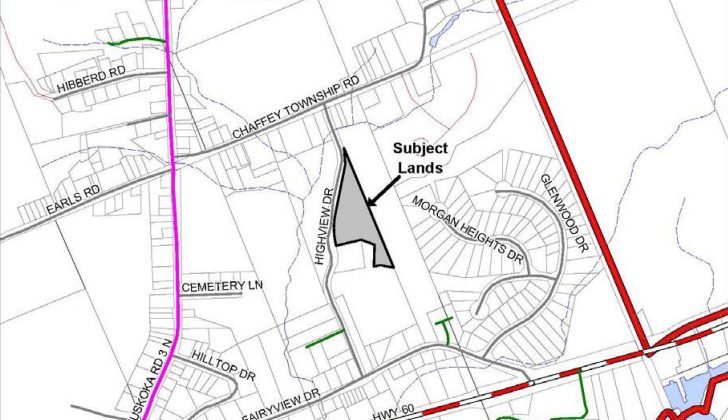 Photo: Showing where the proposed development would be located in Huntsville. Supplied by the Town of Huntsville.

An affordable housing unit in Huntsville could be one step closer to reality after tomorrow. The District of Muskoka’s Planning and Economic Development Committee is meeting tomorrow and on the agenda is a recommendation to draft a bylaw to approve the Highview Affordable Housing project in Huntsville.

The proposal is to build a five-block subdivision, which will have between 22 and 35 affordable units each, for a total of 127 units. There will also be a common area to contain driveways and parking spots, landscaped open spaces and an events building. Full municipal water and sewer services would be accessible, as Highview Drive is a municipally owned and maintained road.

Different funding programs from the district and the province mean a number of the units will be rented at 20 per cent less than the average market rate, for 20 years. According to the Ministry of Housing, the 2017 average market rent for apartment units in the District of Muskoka was $664 for a Bachelor apartment. It was $812 for a one bedroom, $943 for a two bedroom, and $1073 for a three bedroom.

A Visual Impact Assessment has been done for the proposed development and found the units are unlikely to be seen from the shoreline of Fairy Lake because of tree lines and topography that blocks the sight line. However, the assessment did note that the impact could be lessened even more by planting along the southern boundary. The land for the project is just under five acres and is currently vacant and well vegetated with mature mixed forest cover.

The application for the subdivision has already been approved at the Huntsville level, and now the district will take a look at tomorrow’s meeting.