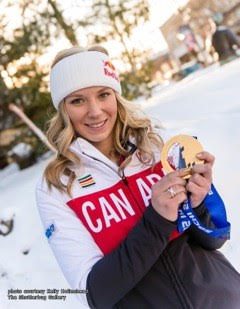 Win or lose, Moose FM is showing its support for Dara Howell. The Huntsville native is hitting the ski hill on Friday night in Pyeongchang to compete in slopestyle skiing for the second time. Howell made history in Sochi in 2014 as the first athlete to win gold in the event because it was the first time the sport was part of the Olympic Games.

On Tuesday, Moose FM is changing its name to Dara FM to show its support for our local athlete. Moose FM Program Director Dave Newman says Howell is an example to everyone of what hard-work, dedication and determination can achieve, and she embodies the Huntsville spirit and what it means to be Canadian.

Howell’s grandmother Sandy Raven says the family’s excitement is off the scale for Friday’s event. She says the community’s support doesn’t go unnoticed.

She says she can vividly remember the moment her granddaughter won gold and the reaction from the crowd around her at Hidden Valley.

You can join Raven in reliving those memories as Hidden Valley is hosting a viewing party of Howell’s run, which gets underway at 8:00pm.

Howell is one of two Olympic athletes from cottage country competing in South Korea, the other is Chris Lee, from MacTier, who is playing on the men’s hockey team.