A mystery rock has been unearthed during construction at Bala Falls 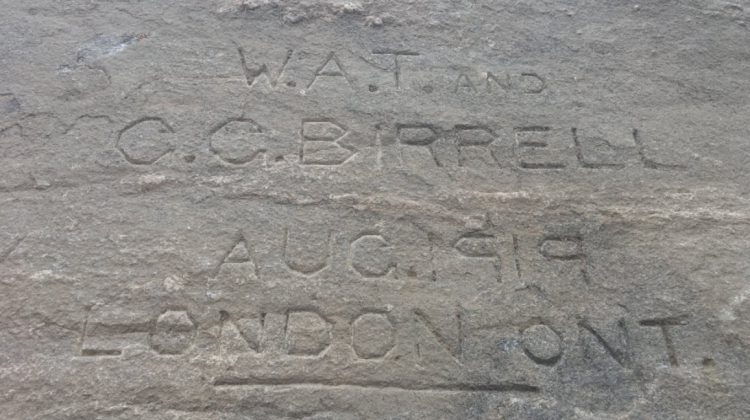 Photo: Part of the engraving on the rock. Supplied by Swift River Energy.

Can you help unlock the secret behind a mysterious rock? That’s exactly what Swift River Energy is hoping, as the construction company at Bala Falls has unearthed a rock engraved with names and dates. Company officials say it’s about the size of a truck, and has the numbers “1888” and “1919” engraved on it, along with the words “Hiram De Pu?? G.V Wilson Pittsburgh US” and “W.A.T. and G.G. Birrell Aug 1919 London Ont”.

VP of Development Nhung Nguyen says the rock is part of the bedrock, and they’re not sure yet if it can be cut out or not. She says even if it can, they are worried it might get damaged in the process as it’s in rough shape. The company’s back up plan is to make a mold of the rock face to preserve the engravings, and they are doing a 3D digital scan of the rock which will stay in the community. They are also working on a commemorative plan and a welcome collaboration with the community.

Nguyen says the team is very intrigued about the rock, and that it’s become a fun project to try and figure out. She says it could be century old graffiti or a survey marker, but it’s too early to tell. Anyone who might have old photos, newspaper clippings, or information about the rock is asked to get in touch with Swift River, which has heritage and archeology experts that can look at the material. Email [email protected] or tweet to @BalaFallsHydro with any details.

Swift River Energy is working on building a new hydroelectric dam at the Bala Falls. Construction is expected to last around two years, and plans include a new park, restoration of Portage Landing and an observation deck. 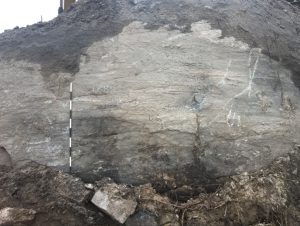 Photo: Part of the engraving on the rock. Supplied by Swift River Energy.

Participants and donations needed for Coldest Night of the Year