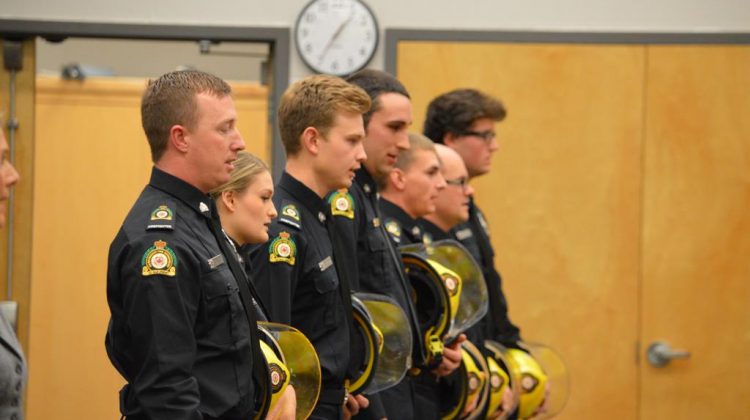 Photo Credit: Submitted by Jason Harnett
Seven new recruits have not only been inducted into the Gravenhurst Fire Department, but have also had a chance to witness some of its major accomplishments.
On Thursday, fire officials from the department came together for the graduation ceremony of these graduates.
This was a special ceremony, however, as the department was also handing out service awards to some of its members as well.
Fire Chief Larry Brassard says the biggest achievement, a 25-year award was given to a very special member.
Lane Duern was not the only one receiving an honourary award.
Father and son firefighters Bill and Ryan Brazeau were once again recognized for their roles in saving a life during a fire in 2014.
The two were awarded the Ontario Medal for Firefighters Bravery by Lieutenant Governor Elizabeth Dowdswell during a ceremony at Queens Park a few weeks ago.
The seven graduates were Hunter Chmilnitzky, Lindsay Neelands, Liam Gleeson, Matt Styles, Isaiah Tryon, Tyler Thomas and Jesse Ward. 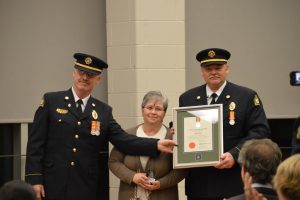 Lane Duern and his wife being presented with the 25-year service award. Photo Credit: Submitted by Jason Harnett