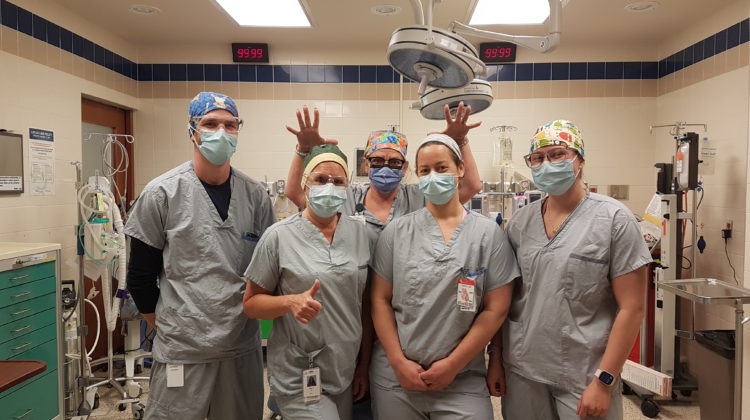 How Muskoka Algonquin Healthcare (MAHC) is able to handle the fifth wave of COVID-19 and beyond will depend on staffing levels.

Vickie Kaminski, MAHC’s Interim President & CEO, says there are 22 employees at home isolating after testing positive for the virus.

“(That) doesn’t necessarily sound like a lot, but it certainly takes a lot out of the system when you have numbers like that at home,” she says, adding they employ around 600 people.

One thing that’s been done to ease staff pressures is delaying non-urgent surgeries and procedures as well as some non-urgent, scheduled outpatient procedures and clinic appointments. Kaminski says that will give staff rest and allow MAHC to deploy them where needed when needed.

Kaminski says the Omicron variant has made things more difficult to handle when compared to last year. There are more patients in hospitals in Muskoka dealing with the virus now compared to January 2021. Kaminski says there are 10 people in hospital now, compared to this time last year when they were averaging two to four patients. The new variant, which she says is more contagious, is hitting staff as well.  “We didn’t have that problem last year,” she says.

“No health system is going to be on an island unto itself,” she says, adding the province has plenty of support systems – and plans – in place. She says they have detailed “surge capacity” plans in place. “That means you start looking at non-traditional places in the hospital where you can put patients,” she explains.

For example, she says a recovery room may end up being used as an inpatient room. That protocol has been kept up-to-date, but Kaminski says they aren’t at the point where it needs to be put in place thanks to support from their partners in the community and provincially.

Along with the shortages, a COVID-19 outbreak is ongoing in the south wing of the Huntsville District Memorial Hospital. Kaminski says the outbreak, similar to the one declared on Dec. 30 at a service department at the South Muskoka District Hospital, which has since been declared over, was contained quickly.

Kaminski says staff are “excellent” at using personal protective equipment, which helps reduce the risk of contamination. She says the vaccination rate amongst staff sits at just over 97-percent. The less than three percent that remain unvaccinated must submit to being tested twice weekly.

Kaminski says both Bracebridge and Huntsville hospitals are currently running at over 100 percent.