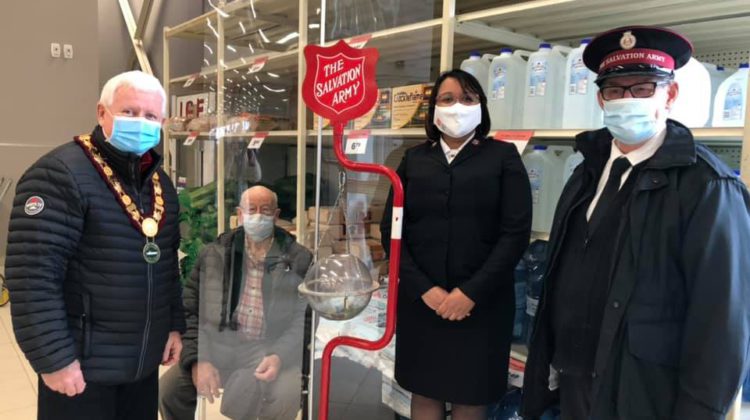 “We haven’t had a number like that for a few years,” says Captain Kam Robinson of Salvation Army South Muskoka Ministries. “It’s really incredible to be able to surpass our goals this year in both communities.”

In combination with the financial donations they get throughout the year and the $141,223.65 raised during Moose FM’s Kid’s Christmas Wish Radiothon, Robinson says this will get them through the next 12 months.

“It was a very good Christmas season,” says Major Neil Evenden with Salvation Army Huntsville. “From the radiothons to Porchlight (https://www.mymuskokanow.com/115638/project-porchlight-raises-estimated-40000-pounds-of-food-for-salvation-army/), food drive to the kettle campaign, to handing out hampers and toys and all that stuff, everything went smoothly.”

Evenden says the money is used for basic needs such as paying bills and salaries, buying equipment, and stocking fresh goods on the food banks’ shelves.

While plenty of food donations come in during the year, Robinson says they like to buy fresh produce as well for their food hampers. Since they surpassed their fundraising goal for the year in both communities, Robinson says it allows them to have extra cash on hand for emergencies, pointing out how they were able to supply the multiple families that lost their homes in separate fires in Gravenhurst last year with gift cards, clothing, and food.

While the campaign went forward last year, she says they had to shut it down at a “very crucial moment” just as they expected funds to take a sharp increase. Along with the new tap feature that allowed people to use their credit and debit cards not hitting as they thought it would, Robinson was anxious to see how this year would turn out.

While the Salvation Army’s 2021 fundraising efforts are done, 2022’s effort begins. You can call your local branch or visit its website to donate. Food donations can be dropped off at their physical locations in each town.

With files from Martin Halek