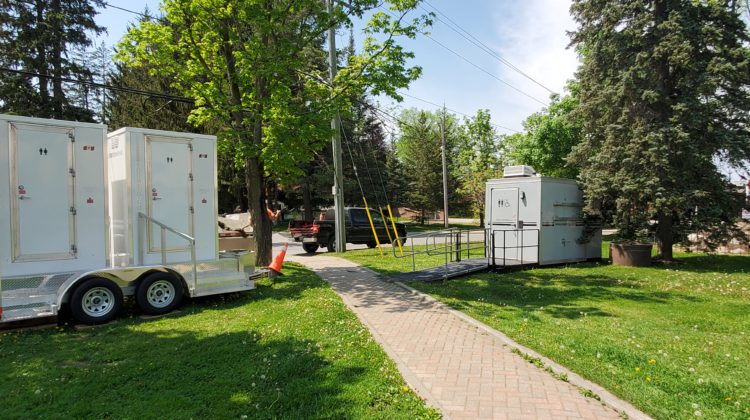 The outdoor bathrooms are located at the back of the Memorial Park in Bracebridge (Photo credit: Mathew Reisler)

The two temporary bathroom units that were installed in Memorial Park in downtown Bracebridge have encouraged town staff to recommend a permanent unit be installed in the future.

“The washrooms were well used,” the town’s Manager of Operations Scott Clayton tells the MyMuskokaNow.com newsroom with a chuckle.

The units were taken away on Thursday (Photo credit: Mathew Reisler)

The units were installed in mid-May and Clayton said at the time the plan was for them to remain into the fall leaving open the possibility for them to become permanent if they received enough positive feedback.

“There is a need for them,” Clayton says, adding where they were located for the past five months worked out well.

Clayton goes on to say the units at the park have been removed for the winter for cleaning and maintenance but adds they will return next year. For now, a temporary port-a-potty unit have been placed on the side facing Rene Caisse Lane.

Clayton didn’t give a timeframe for when the permanent facilities may be installed but did say temporary units will continue to be installed in the park until a full-time one is purchased. He adds that there will be an accessible unit installed as well. Clayton says a unit will also be installed at Bird Mill Park.