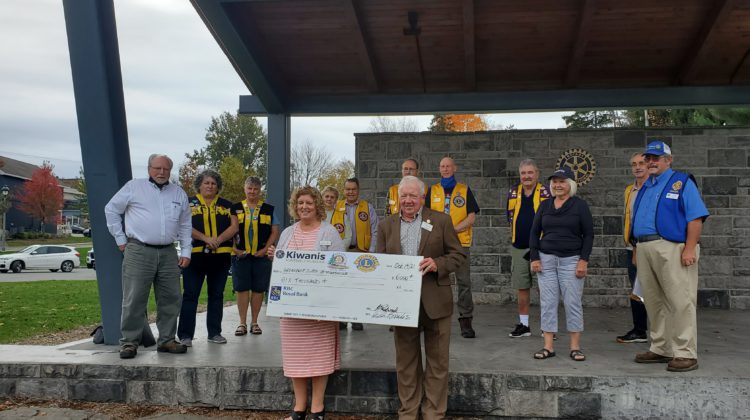 “Students of all ages, many of them come to school not prepared, not having their brains ready by having some nutrition in the morning,” says Reain. “These funds will help provide breakfast for them to get them started. We will also use some of the money to provide nutritional snacks through the day: apples, bars, that type of thing.”

“Kids learn better when they’re well fed. When they’re not hungry. So this will do great things for their learning, as well as for their mental health and well being,” says Corriveau-Truchon. “It’s just an all-around great contribution to their day.”

Involved in the initiative were the Rotary Club of Huntsville, Kiwanis Club of Huntsville Muskoka, and the Lions Clubs of Dwight, Dorset, Baysville, and Stephenson. According to Peter Redwood of the Rotary Club, who coordinated the local effort, the idea came after the international body of each club encouraged them to partner with each other during the COVID-19 pandemic. A couple of phone calls later, he says, all of the local groups were on board.

“We suddenly realized that we all have youth in our programs, the future of our country is youth-based,” says Redwood. “We quickly came to the realization that one of the things we can do, without getting hands-on, is to provide funding to the breakfast clubs at each of the schools in the Huntsville area.”

Stasi O’Hare, Zone Chair for the local Lions Clubs, says they’ve been involved with local breakfast clubs for some time, and that joining this effort was a no-brainer.

“We have donated to breakfast club programs before, so what was already something that we would have done, we just decided to do a bigger initiative,” says O’Hare. “Because of COVID last year, it really wasn’t ran, so we think the need is far greater. Food insecurity is a big issue in our communities, so we certainly see the need.”

On top of the $6,000 already pledged, Rick Brooks, Secretary Treasurer for the local Kiwanis Club, says he’s hopeful the clubs can fundraise even more.

“It’s climbing, and we’re getting there: we’re hopeful that we’re going to have at least $8,000 by next week,” says Brooks. “[We might] have to do some strong-arming with the grocery stores, to add to that total.”

Brooks adds that fundraising efforts should be done within 10 days, with the funds getting to the schools within two to three weeks.

“It’s my hope, and it’s Rick’s hope, and I think everybody’s hope around here, is that we can make this happen more frequently than once,” says Redwood. “Let’s try to make this an annual thing.”