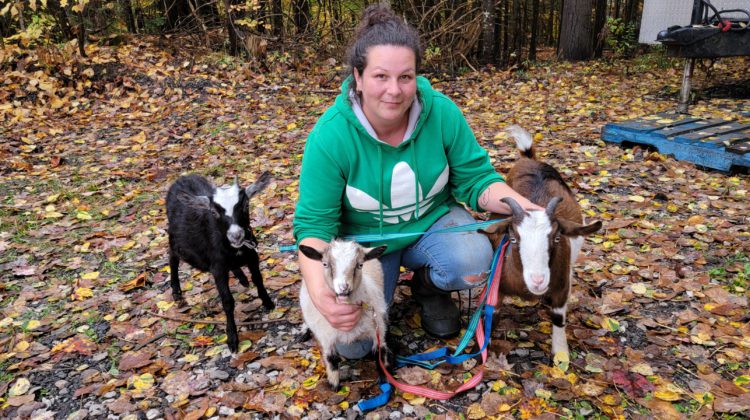 It’s a word many of us have gotten used to hearing since the COVID-19 pandemic began: pivot.

For Stephanie Brooks, she did just that when she lost her job at Stoneleigh Farms.

“It wasn’t supposed to be an idea,” she says about the creation of Muskoka Goat Away.

Brooks already had a few goats at her property in Huntsville that she and her kids would walk to get exercise. When the farm shut down during the pandemic, one of her friends suggested she allow people to walk the goats as a way to relieve stress. “I thought ‘who wants to walk goats,'” she says as she walks through the forested area with three of her six goats.

Trouble, Hunter and Penelope were the three that she was walking with. The other tree – Posie, Piper, and Honey stayed at home.  Her daughter Gracie was leading the way down the winding trail.

“There are many ways we can go ranging from easy to hard to challenging,” she explains about the trails. “It gets everyone out for an hour.”

“People can’t believe how well behaved they are,” Brooks says, adding that over the weekend an eight-month-old baby held onto one of the goats while her parents pushed her along in a stroller. Brooks says a few of the goats can be diva-like and might decide to just stop walking. She says the people on the trip will then just pick them up and cuddle them as they continue down the trail.

She says she only started the business on October 7th and is already booking times in December. “October is almost full,” Brooks adds. “It’s been overwhelming.”

With her initial success, Brooks says it’s possible she gets a few more goats. “I never say no to goats,” she says grinning from ear to ear.

She has also applied for Lake of Bays’ Community Grant Program. If successful, she plans on building a barn on a neighbouring property that will house the goats and make it easier for her to transport them for walks. There would also be fencing around the enclosure so people can stop and visit the goats.

Currently, she walks up the road from her house to a meeting point.

Brooks believes this is the perfect COVID business: take an hour away from dealing with what the provincial and local case counts are or fight with a family member about their vaccination status to relax in the wilderness while walking a cute baby goat.

Who would have thought a goat walking business would end up being so popular? Brooks sure didn’t. “It’s a big world out there and there are lots of people who love goats just like me,” she says.

The goat walks cost $20 per goat for a maximum of six people. Brooks says the walks will be done year-round, except for when there’s severe weather in the forecast. If you want to book an appointment, email Brooks at [email protected] or reach out through her Facebook page.