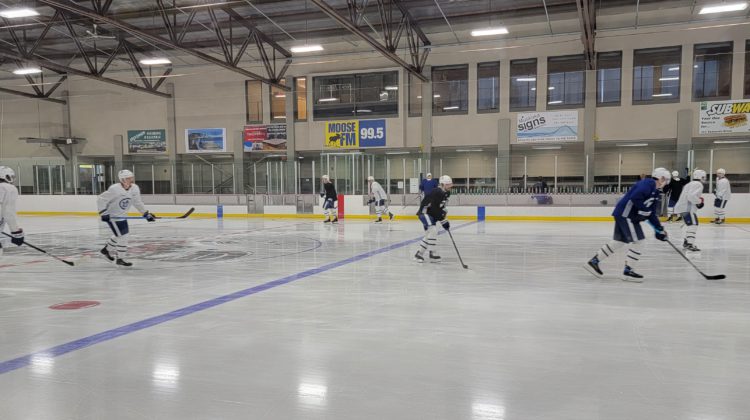 The Toronto Maple Leafs spent three days bonding in Gravenhurst during a trip the team unanimously agreed was well worth the two and half hour trip north.

The team arrived in Gravenhurst in time to get in a round of golf on Wednesday before practicing at Graeme Murray Arena. In between, Marner said they climbed aboard the Wenonah II to travel Lake Muskoka.

“We had a couple of people that knew we were out there,” Marner said, adding they did “donuts” around the cruise ship to try and get the player’s attention.

Matthew Marshall was one of the many kids that stood outside the Graeme Murray Arena (Photo credit: Mathew Reisler)

During both practices, kids and adults alike surrounded the team’s bus and the area where the media was interviewing the players hoping to catch a glimpse of their heroes or, better yet, get an autograph or picture.

Matthew Marshall brought a stick along and got John Tavares, Auston Matthews and the team’s bench boss Sheldon Keefe to scribble their names on it with a distinctive silver sharpie. “I’m a big, big fan,” he told the MyMuskokaNow.com newsroom.

Marshall said he watches every game on TV but hasn’t gotten the chance to see a game in person at the Scotiabank Arena in Toronto. “It’s really cool to see them in person,” Marshall added. “They’re big names and even bigger people.”

“I’ll probably come back quite a bit,” Marner said when asked if he plans to travel to Gravenhurst during his off-time.

Veteran Jason Spezza likely doesn’t have a choice in the matter; his wife is from Huntsville. “I spend quite a bit of time up here,” he told the assembled media while laughing.

“The people are so welcoming, they respect us, they gave us lots of room and privacy,” he said, adding everyone they met has been in a great mood. “I think it really speaks to the communities around here and how passionate they are and I think they want to show us a good time and they did.”

“You guys follow us around everywhere so I wouldn’t completely call it a getaway,” the team’s other star forward Auston Matthews humorously said about the media after Thursday’s practice. He went on to say that his first trip to Muskoka has been positive. He added that it seems he came at the perfect time with it being “beautiful” in the area with the changing fall colours at their peak.

Keefe complimented the community in Gravenhurst for being so welcoming during their three-day getaway.

On Thursday and Friday, fans surrounded the team’s bus outside the area (Photo credit: Mathew Reisler)

Heading into the season, the team has made a handful of moves to bolster the team’s potential push for the Stanley Cup after five seasons in a row of disappointing playoff results.

Keefe said the results of this trip likely won’t be felt until later on in the season. “You start to see little things like who’s eating together during meals, like guys that weren’t eating together previously,” he pointed out, adding it extends to practices as well. “There’s a little bit more banter back and forth. Those are the kinds of things you’re looking for as you’re realizing the team is getting closer together.”