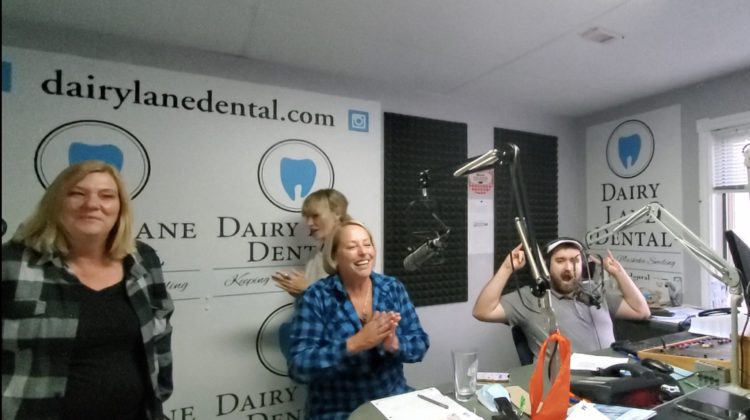 The 105.5 Moose FM air room right after the total was announced (Photo taken by Martin Halek)

A 12-hour radiothon in Huntsville helped raise more than $160,000 for the local hospital.

After countless donations and many sponsors, the day ended with a total of $166,500 raised. It is the most the event has raised in Huntsville, and almost $100,000 more than last year’s total of $76,000. The full total, which includes additional fundraising efforts by Smokin Hot BBQ, Farmer’s Daughter, and Briar Summers, has yet to be announced.

“I can’t even describe how excited we are that we really raised so much money, and our donors are amazing,” says HHF Executive Director Craine. “It’s just… I’m speechless.”

Craine says this year’s funds will go towards the HHF’s $5 million Focus on Imaging Campaign to upgrade the imaging capabilities at the Huntsville Hospital.

“This money is going directly to purchase equipment for our diagnostic imaging department,” says Craine. “Imaging equipment does have a lifespan. Just like any kind of technology, the time runs out on a piece of equipment. We’re looking at in the next two or three years, this equipment needs to be replaced.”

Craine says she’d like to thank everyone who donated, sponsored, called in, told their stories, or stopped by, as well as the staff at 105.5 Moose FM and the HHF’s board of directors, without whom “this wouldn’t be possible.”