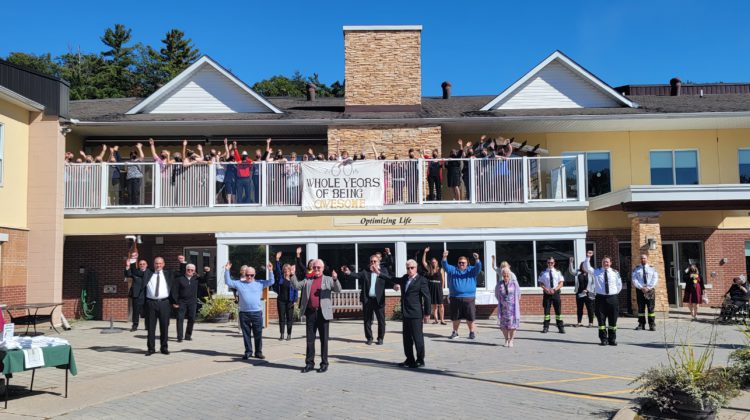 “It’s incredible that an organization pre-exists the governing body that is responsible for it,” the District of Muskoka’s Commissioner of Health Services Norm Barrette says.

The Pines was opened in 1961, while the District of Muskoka as we know it was established in January 1971. “The fact that area municipalities came together because they saw a need for The Pines 10 years ahead of the district (forming) I think just adds to that uniqueness and adds to what makes this place special,” Barrette goes on to say.

“As Muskoka grows, so does the need for long-term care,” Chair of the district’s Health Services Committee Steve Clement says. He boasts that The Pines has consistently been one of the top requests homes for seniors to live in.

“We have to change as time goes on to accommodate the needs of patients,” he goes on to say. When the home was built 60 years ago, the life expectancy for people living in long-term care was home about 80 years, but three years ago they had over a dozen people over 100 years old, adding they also have more Alzheimer’s and dementia patients than ever, meaning more special care is needed. That being said, Clement is proud of the fact that The Pines is also a good place for someone to live who may only need a little extra care in their old age.

The Pines has always been located on Pine Street, but in 2004 residents moved out of the old building and into the one they currently occupy. The move was done to allow for the resident population to increase from 105 to 160. A few years later the old building was demolished. “We’ve had to adapt to increase the supports people require,” Barrette says. He adds that the needs of residents are always changing and staying on top of that can sometimes be challenging. He tells the MyMuskokaNow.com newsroom that the road forward isn’t totally clear, but he knows technology will play a large part in the future of the long-term care home. “We’re using technology to better connect care and access specialists,” Barrette says.

“This home is special,” he says. Barrette has spent two years working in Cornwall and 15 in York Region but says more than any other home he’s worked in, The Pines has a special “energy” to it unlike any other. “There is life, there is joy, there is a community in this home,” he says. “Residents and staff really share the joy.”

In April, The Pines was handed a $60,000 cheque from the province to help with upgrades to the building’s air conditioning system and make other miscellaneous repairs.

Clement credits the work the staff of home have done during the COVID-19 pandemic despite the ongoing issue of staff shortages. The Pines’ Administrator Jennifer Ridgley said last week there are 13 vacancies. This was revealed during the district’s Health Services Committee when Conestoga College was added to a program that helps students learn to work in long-term care homes. The Personal Support Work (PSW) FAST Program already includes Georgian College and the Holi Health PSW School in North York.