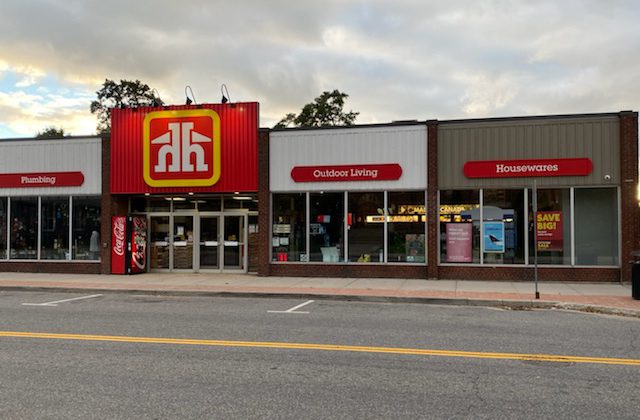 The Home Hardware in Gravenhurst (Photo taken by AJ Pirhonen)

The Home Hardware in Gravenhurst has been awarded the company’s top honour in the region.

Store owners and married couple Ian and Tara McNaughton were presented the award for Best Home Hardware in Central Region at Home Hardware’s 2021 Virtual Fall Market on Monday. The division covers all of Ontario and much of central Canada, according to Ian McNaughton.

McNaughton says he and his wife were told in advance that they’d won the award, but had to keep it a secret until the reveal. He says it’s nice to have the secret both figuratively and literally out of the box.

“The award was actually under my desk in a white box for probably a month and a half, so it was very difficult not to tell the staff,” McNaughton says with a laugh.

The McNaughton’s have operated the Gravenhurst store since 2011, and moved to a new location in March of last year, right before COVID-19 lockdowns rolled out.

“To build this store was a lot of work and it was a lot of people,” says McNaughton. “To win this award a year after opening this store, especially during COVID and all the challenges that COVID has thrown at us, was just a ray of sunshine in everyone’s day.”

McNaughton says he thinks the store won largely because of its dedicated staff, as well as the shopping experience they’ve cultivated inside the “deceivingly large” store.

“We just want to say thanks to the community, and to our staff and our team,” says Ian McNaughton. “It’s not the work that Tara and I do every day, it’s the work that our team does, and our community who supports us and our customers who come in every day. We know our customers can shop elsewhere, and they choose to come to our store, so it’s our job to continue to earn that loyalty.”