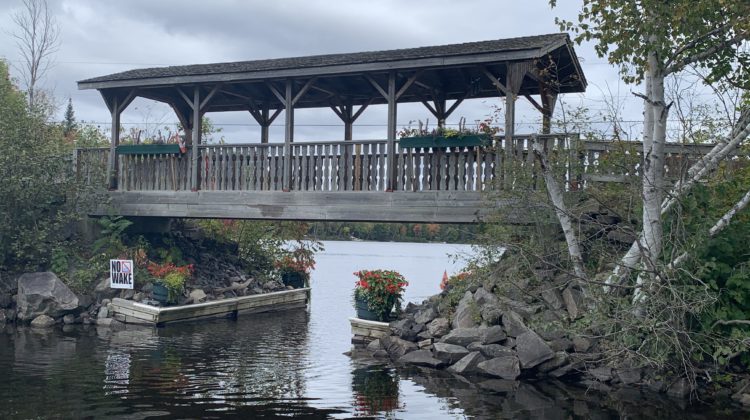 The 130-year-old Paint Lake Bridge has gotten a facelift thanks to the Paint Lake Association.

Ardith Symmes serves as the Beautification Director for the Lake of Bays Association, who oversaw the bridge’s facelift. She explains they have maintained the bridge since it was rebuilt in 1999. She and a group of 20 volunteers spent 50 hours building flower boxes on the side of the bridge and under it. “It doesn’t matter whether you’re walking or going under the bridge, it’s a beautiful sight,” Symmes says. “This beautiful bridge stands on its own. It connects the smaller part of Paint Lake with the larger part of the lake.”

“The bridge is so vital for the community,” she says.

The association’s President Tom Swain says the bridge dates back to the 1880s when James Norton built the log bridge to gain access to timber and work on clearing land on the north side of his farm. “It had to be big enough for a team of horses and a wagon and sleigh,” he adds. The original bridge was 10 feet by six feet but was extended in the 1900s with a divider added to make it more stable. Swain says in the 1970s, the Township of Lake of Bays assumed the road a horse and vehicular roadway. In 1997 though, tragedy struck when a boat crash led to the bridge being demolished. After two years of lobbying by locals, Swain says town council agreed to make a new bridge and raise it to make it safer for boats to pass under.

“This is a fantastic good news story,” Lake of Bays Mayor Terry Glover said in a YouTube video announcing the reopening of the bridge. He added that initiatives like this are what make Lake of Bays fantastic: “the people.”

“We want to thank everybody who played a part in fixing up the bridge,” he said.

On top of the bridge’s new paint job, Swain says they also built a bench at one end and set up two little libraries – one for kids and the other for adults – at the opposite end of the bridge. “You can sit on the park bench and enjoy the view of Paint Lake,” he says.

“We have a great community and we have such a great volunteer group,” Swaim boats. He adds that discussions about “tidying up” the bridge have been ongoing for quite some time. “You get a bit of a feeling when you’re speaking with certain people,” he says about town staff. Swain says he and Lake of Bays’ Superintendent of Parks and Facilities Scott MacKinnon spoke extensively while the work was ongoing and the plan is to keep the positive relationship going to keep the bridge and the area surrounding it beautiful.