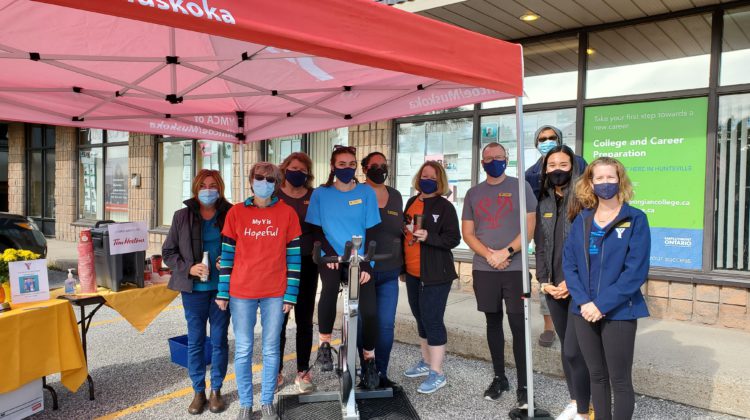 Keeping an exercise bike moving for six hours straight is a daunting task, but staff at the Huntsville YMCA office might say it is easier when the load is shared.

Set up in front of the YMCA Huntsville Employment & Learning Services office, staff and community members took turns on an exercise bike to fundraise Tuesday, as part of the YMCA of Simcoe/Muskoka’s annual Move to Give campaign.

By the event’s end at 3:30 p.m. $4,176 was raised and 129 km biked in Huntsville. According to Mary Ellen Fetterly, Team Leader for Employment Services at the Huntsville YMCA, the money goes towards making the community healthier.

“The YMCA has a goal that no family or individual in the community goes without service,” said Fetterly. “If you are a family that may not have the means to attend the gym, they make it happen. Also, we send kids to camp that might otherwise not be able to afford to go.”

Less than two hours after the event started, the “Huntsville Heroes” team was well on its way toward its distance goal.

“Everyone is taking a stint on the bike doing 10-minute rounds of cycling, and we’re up to over 30 kilometres already,” said Fetterly. “We started at 9:30, and our goal is to hit over 100.”

Anthea Bragagnolo, an Employment Specialist at the office, gave an interview during her second shift of five on the bike.

“Talking and riding a bike is not the easiest: I thought it would be easier,” said Bragagnolo, laughing and slightly out of breath. “I’m going easy, I’m not giving it too hard.”

With single-digit temperatures in the morning, participants were in for a chilly ride. Bragagnolo says the cold weather was actually an asset.

“The cool breeze really helps, I was wearing a sweater this morning and I had to take it off already,” she said. 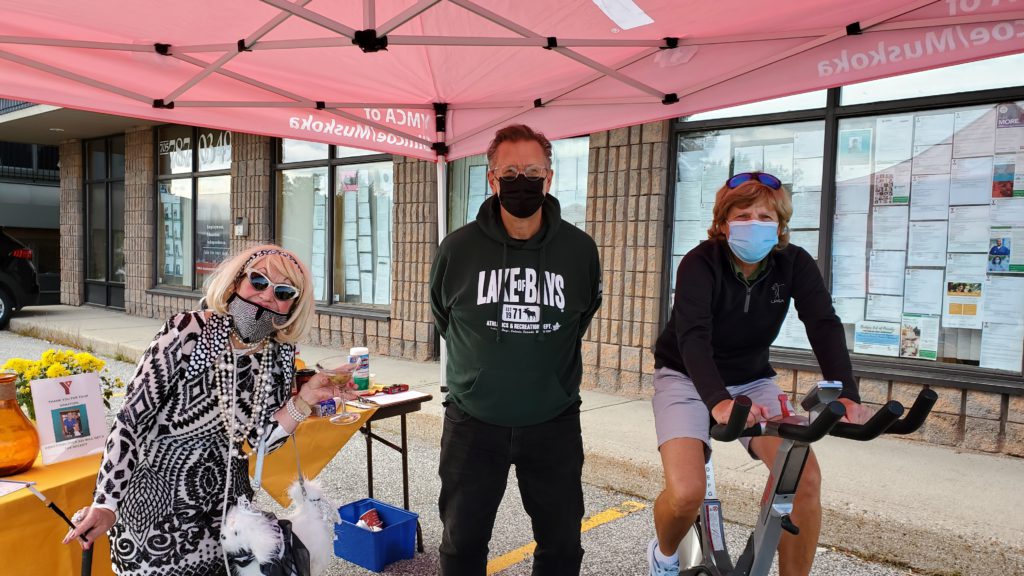 Huntsville Mayor Karin Terziano and Lake of Bays Mayor Terry Glover made an appearance in the afternoon, each doing a shift on the bike. Gravenhurst Mayor Paul Kelly video-called in from his own exercise bike, logging 5.1km to be added to the total. Local celebrity Pamela “Peaches” Pryer-Warrington Woodcock, 89, also stopped by for a shift on the bike.

“We’re excited that we’ve had such a great response from the community, some great corporate sponsors as well, so we’re thrilled to have that support,” said Fetterly.

Although the event was cancelled last year because of COVID-19, the Huntsville location still raised about $2,000, according to Fetterly. This year, the local goal was $4,000.

Donations can be made on the YMCA of Simcoe Muskoka website until October 12th.