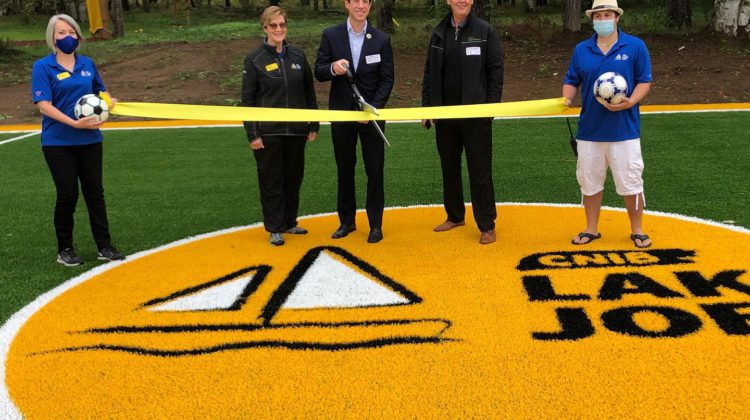 The Canadian National Institute for the Blind (CNIB) Lake Joe is the first organization in Canada to be selected by the United States-based Synthetic Turf Council (STC) for its annual Community Service Project.

The council donated a fully accessible synthetic turf soccer field and a mini-golf course. Executive Director of CNIB Monique Pilkington tells the MyMuskokaNow.com newsroom she’s excited about both but is happy to see the golf installed to replace the old one that was removed after it started to show signs of deterioration.

The field and course were officially unveiled last week as part of the MacTier-based camp’s 60th anniversary. CNIB Lake Joe boasts of being the only fully accessible camp for people with sight loss in the country.

“It is fast and furious,” Pilkington says of the new pitch. She explains they will play five-a-side soccer on the field, which is one of the sports featured at the Paralympics. The perimeter of the field is painted bright yellow to warn players they are nearing the boundary line. The area is also filled with crushed walnuts to help players who are legally blind. Pilkington explains stepping on that surface will sound different than the normal playing surface. The ball being used has a bell in it to help players orientate themselves and Pilkington says the field was designed so the grass near the boundary is thicker. The field isn’t finished just yet and Pilkington estimates the price tag will be around $300,000 when all is said and done. The majority of the materials and labour were donated by the STC with a handful of local businesses stepping up to help.

The new mini-golf course replaces the one that was removed to make way for a 36-foot climbing tower. Pilkington says the old course was in rough shape, so it was decided it would be best to destroy it to make room. “The (new) mini-golf course is just an incredible project,” she says. “It was just so wonderful because our guests enjoyed that activity so much.”

“The golf holes are actually designed so that the top four holes – it’s a nine-hole course – spell mini in brail and the bottom four spell golf in brail,” Pilkington says. The turf leading to the green and the green itself feels different to help guide players along the course. There are also guide rails in place to help people get from hole to hole.

“We want to make sure people with sight loss can enjoy these activities,” Pilkington says.

The camp is only open from May to October every year. “The experiences people have at CNIB Lake Joe, don’t just stay here,” she says. “When people go back to their homes, those experiences ripple out with their families, communities far and wide. We don’t want things to happen here that just live and die here.”

Pilkington says she’s excited to see what campers and visitors think of the new additions when the camp opens on May 1st, 2022.