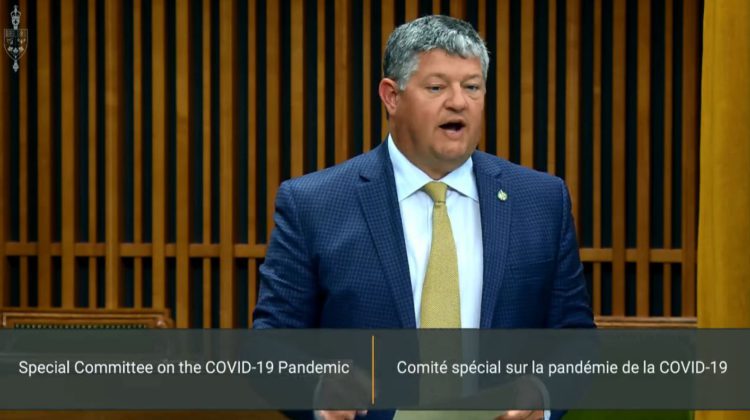 Scott Aitchison is projected to be re-elected as the MP for Parry Sound-Muskoka.

With 233 out of 234 polls reporting in the riding, the Conservative has 47.7-percent of the vote, more than doubling the total second-place Jovanie Nicoyishakiye of the Liberal Party has as of Elections Canada’s latest update at 1:18 AM Monday.

“I’m humbled by the result,” Aitchison tells the MyMuskokaNow.com newsroom, adding it’s “an honour to have the trust of your neighbours,” but there’s a lot of work ahead.

The former two-term Mayor of Huntsville praised his six opponents in the election for remaining civil and focusing on the issues that matter locally. “All the candidates did great things, ran great campaigns and talked about ideas,” he says. “They didn’t attack each other or me and I’m pleased about that.”

Behind Nicoyishakiye is the NDP’s Heather Hay with 16.9-percent of the vote, The People’s Party of Canada’s James Tole with 7.7-percent, the Green Party’s Marc Mantha with 5.6-percent, Independent Daniel Predie Jr. with 0.4-percent and the James Fawcett of the National Citizens Alliance with 0.2-percent. Other than Predie Jr., all his opponents were running for federal office for the first time. “It’s not an easy thing to do, but it’s important,” he says about running for office.

While he’s pleased to be re-elected, he’s not as happy to see Justin Trudeau and the Liberals re-elected with a minority government. “I’m disappointed that Canadians didn’t punish what I see as a selfish move,” he says. He believes the result shows that Canadians want their elected officials to get to work on getting through and recovering from the COVID-19 pandemic. “I hope that all parties get that message,” he says.

For Aitchison, at the top of the list of issues he wants to address are housing and connectivity. He says there’s a “number of projects” that haven’t received the attention they need from the feds. “Muskoka is not well served,” he says. “I’m going to get to work on those files because the resources are there, we just need them to pay attention to rural Canada.”

While it would be hard to fault Aitchison for taking a day or two or relax, he says he’s already been on the phone with his colleagues in his party and across the aisle to congratulate them on their victories and talk about what’s next. Specifically, Aitchison says he’s excited to meet and work with newly elected Simcoe North MP Adam Chambers. “He’ll be fantastic and I’m really excited to work with him,” he says. Chambers ran in the riding in place of its long-time MP Bruce Stanton who announced last year he wouldn’t run for re-election.