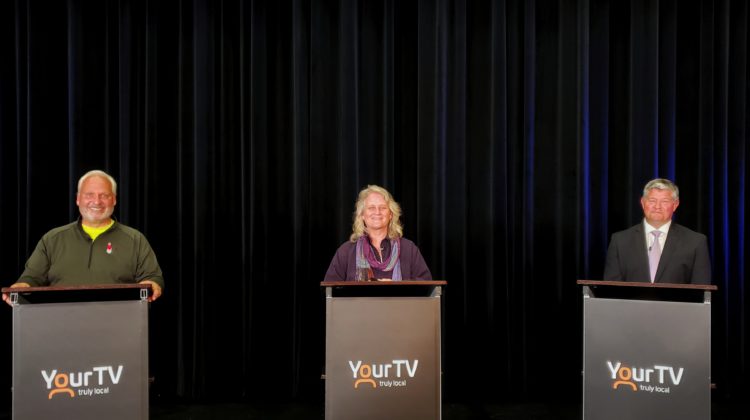 Local candidates for Parry Sound-Muskoka fielded questions from both the public and each other at the federal all candidates debate.

James Tole of the People’s Party of Canada, the National Citizens Alliance’s James Fawcett, and independent Daniel Predie Jr. were not invited to participate in the debate, as none belonged to a party holding seats in parliament. Each non-seated candidate instead presented their platform virtually during breaks in the main debate.

Discussing housing, Aitchison blasted the federal Liberals for “all but ignoring” the housing crisis, adding that he ran as an MP in 2019 mainly because he had done all he could at a local level as Mayor of Huntsville. Hay commented that the Conservatives created the problem in the first place. Aitchison responded by calling the notion that one party created the problem “disingenuous,” explaining that the housing crisis has existed for some time, and gotten worse under the Liberals. During his answer time, Mantha promoted the idea of funding affordable cooperative housing through the Canada Mortgage and Housing Corporation, but was cut off during the debate portion because of time.

Regarding climate change, Mantha said the Greens would work to make the riding’s tourism sector more sustainable, and that collaboration with First Nations in the area was a necessity. According to Hay, carbon emissions need to be reduced by more than half, and that money subsidizing fossil fuels should instead be used to fund green technologies and retrofits in the energy sector. Aitchison said Canada should focus on becoming a world leader in green technologies, such as fuel cells and carbon recapture.

Mantha opened the debate portion, saying that moving from industries that cause climate change to industries that stop it presents many economic opportunities. Aitchison agreed, praising the work of conservation groups in the riding. Hay then accused the Conservative Party of not believing in the existence of climate change. Aitchison stated that the party’s official stance is that climate change is real, citing its climate plan, and said it was a “red herring” to try to paint the Tories as climate deniers.

The candidates found common ground on a few subjects. While discussing COVID-19 vaccine passports, each candidate said the federal government should encourage citizens to get vaccinated if they are physically able to, but agreed that for some citizens, vaccination is not an option and rapid testing should be used instead.

Discussing Indigenous relations, Aitchison credited the Liberal government for making progress in reconciliation; Mantha, who is Métis, thanked Aitchison in turn for being “key” in acknowledging the discovery of mass graves at residential schools. All candidates also acknowledged the need to clamp down on racism within government bodies such as the Royal Canadian Mounted Police.

On the topic of electoral reform, each candidate criticized the Liberals for not following through on a 2015 election promise to move away from the first-past-the-post voting system. Hay said the system means certain groups are not represented as much as others. Mantha agreed, adding that the votes of millions of Canadians essentially “don’t count.” Aitchison suggested a referendum on the matter, to which Mantha replied that past referendums on the subject have not fixed anything.