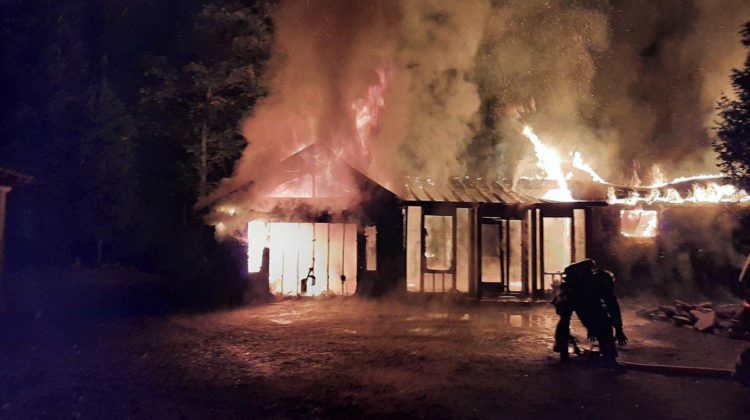 The house fire in Lake of Bays on Labour Day (Source: @HLOBfire on Twitter)

UPDATED Sept. 8th: A GoFundMe has been set up for the family who lost their home.

Firefighters responding to a house fire in Lake of Bays had to retreat when ammunition inside the home began exploding.

The Huntsville Lake of Bays Fire Department was called to the site on Fieldale Road shortly after 10 p.m. Monday night, after the house’s residents smelled smoke. Responding crews from Fire Stations 1, 2, and 3 began fighting the fire, but when the ammunition stored inside caught fire, firefighters were temporarily forced back for safety reasons until the explosions stopped.

While no one was injured, Huntsville Lake of Bays Fire Chief Rob Collins says the house was a total loss, with damage estimated at $550,000. According to Collins, the ammunition was safely and legally stored, but once fire was introduced, all bets were off.

“Best thing you can do is let responding crews know that those articles are inside there, so that the firefighters can look after their own safety while they’re trying to extinguish the fire,” says Collins. “It’s not like in the movies where you see bullets flying and ricocheting everywhere, but it is definitely an ignition hazard and you do get some stray materials flying around.”

Collins says an investigation into the cause of the fire is ongoing, and no further information is available at this time. He also reminds residents that having working smoke alarms is “the number one thing you can do to protect yourself from fires.”