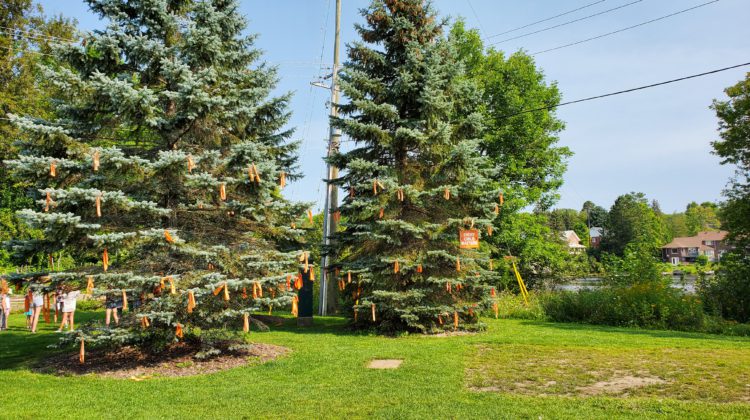 An Indigenous memorial display in Huntsville has been dealing with vandalism for more than a month.

The Hope Arises project in River Mill Park was put up in mid-July in honour of the Indigenous children found in mass graves at residential schools across Canada. The display consists of orange ribbons tied around the park’s evergreen trees, signifying the undocumented children who died at residential schools, as well as a sign bearing the message “every child matters.”

Since the display went up, ribbons have been torn down regularly and the sign has been stolen several times, according to project organizer Joyce Crone, a Mohawk woman and retired educator. She says she didn’t want to jump to conclusions, but the specific, targeted nature of the vandalism makes her think it might be an act of hate.

“When I experienced the very first vandalism, I thought it was probably just a random act of vandalism, and I was very saddened and disappointed, but we put the ribbons back up again.” says project organizer Joyce Crone. “[Now] it’s looking like there is someone, or a group of people, that aren’t happy with Indigenous people, or the situation.”

According to Crone, the most baffling act of vandalism so far was the removal of a large, heavy log bearing symbolic baby shoes, twice. “It’s a log that I can’t carry, so someone is clearly doing this on a very intentional basis,” says Crone.

“I’d just like to say ‘stop’,” says Terziano. “I’m not sure that I have a bigger pet peeve than people that do any sort of vandalism. It’s just so senseless and so meaningless to vandalise anything. I just wish they’d stop, and I hope that anyone in the community that sees it happening reports it.”

Terziano says she’s instructed town staff to install a light pointed at the memorial, as requested by Crone and recommended by the OPP. The light was installed Tuesday afternoon on the park stage. Crone says she’s very pleased with the town’s speedy response and continued support on the matter.

Crone says she and co-organizer Robyn Taylor have been visiting the site almost daily to make sure the memorial is intact. Most days, she says, it is not. However, that hasn’t stopped the pair from dutifully restoring the display.

“The ribbons will keep going back up,” says Crone. “We are resilient, we are strong as women, and we’re not going to give up, and neither will the town, to make sure this memorial stays intact.”

Crone adds that she’d like to turn Hope Arises into a registered charity for Indigenous advocacy, and that orange ribbons educating on documented residential school victims are available at The Great Vine, Sustain Eco Store, Muskoka Hot Rocks, and Bank of Nova Scotia in Huntsville.