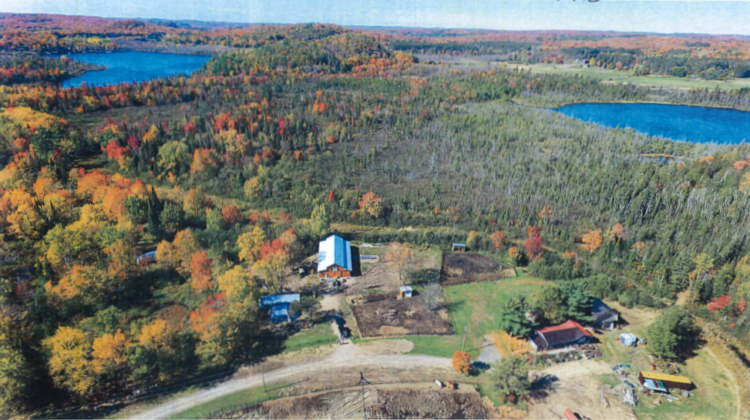 After three unsuccessful passes through Huntsville’s planning committee, a barn built without a permit has been approved by the town council.

The barn stands at a farm on Glen Acres Road. The owners of the property, Doug and Gayle Wheeler, applied in January of 2020 through a planning consultant for town permission to operate the barn as a “private functions venue” between May and October each year.

Because the barn was built without a permit, the application was deferred twice, awaiting information about noise mitigation, parking requirements, sanitation facilities, a study of the floodplain where it sat, and consultation with the Ministry of Northern Development, Mines, Natural Resources, and Forestry.

Ultimately, the biggest snags in the application had to do with the barn’s proximity to the Big East River Delta. At the time the application was filed, the barn sat on a Provincially Significant Wetland (PSW), a protected area vital to the local ecosystem. After a Ministry review of the area in May of 2021, the boundaries were revised, and the barn no longer sat on protected wetlands. However, potential flooding was still a concern.

A report by Dan Duke of Duke Engineering presented that the property did not have any significant issues with flooding in 2013 or 2019, during which time severe floods happened in Huntsville and the surrounding area. It also mentioned that the 350 metres between the barn and the river, as well as the many trees in the way, would be enough to reduce the flow of water to the point that flooding would not be a major concern, designating the area as “flood fringe” rather than a “floodway.”

However, Huntsville Manager of Planning Richard Clark said at the August 11th planning committee meeting that although water speed might not be a danger, water depth would be.

“The depth and velocity is what’s important when considering flood risk,” said Clark. “On this property, Mr. Duke said the flood depth would be 1.28 metres: that’s above a child’s head, that’s impassable in a vehicle. The flood depth on this property is significant, it is floodway, [and] development should be prohibited.”

Planning committee ultimately voted alongside town staff’s recommendation to deny the application. Councillor Jonathan Wiebe, who voted to deny, said he respected the facts presented, but could not stand behind the idea that the owners had built first, and asked forgiveness later.

“I can’t in good conscience say you’re going to beg for forgiveness afterwards, even though it’s of great importance, and we’re going to say that’s okay,” said Wiebe. “The message it sends to all other builders, in my opinion, is not worth it. I think that I’m not prepared to put my name on a precedent-setting motion that says you can build a large structure, not just for farming, not just for livestock, but for private use in a rural residential type area to make money in the off season as a party venue.”

Wiebe had also echoed concerns of town staff that the information provided on the application, specifically on the depth of potential flooding, was not complete.

However, when the decisions of the planning committee were brought before town council to be ratified, the resolution on the Glen Acres Rd. property was separated from the others to be voted on independently.

Several councillors, including Dan Armour and Deputy Mayor Nancy Alcock, said they were able to visit the venue in person and vouch for the steps the owners have taken to bring the property in line with town requirements. Councillor Tim Withey said that while he wasn’t happy that the owners had built the barn without a permit, there was no merit in punishing them at this point.

Councillor Bob Stone then brought forward an amendment to the resolution that would change it from a denial to an approval. Both the amendment and the resolution passed with a 7-1 vote, with Councillor Jonathan Wiebe voting against in both cases.

The barn is no longer in imminent danger of being torn down, but the owners are not out of the woods yet. According to Huntsville’s Director of Development Services Kirstin Maxwell, they’ll still need to visit the town’s building department to make sure the structure is up to code.