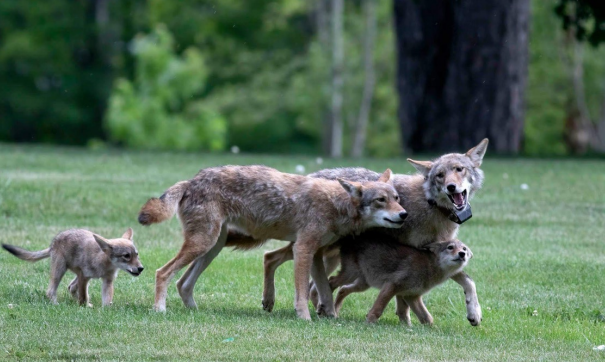 Aspen Valley Wildlife Sanctuary (AVWS) is lending a hand in the effort to deal with urban coyotes.

Given the name “Urban 23” by the Ministry of Northern Development, Mines, Natural Resources and Forestry, a coyote that was located in Scarborough’s Pine Hills Cemetery is now a “permanent resident” of Muskoka under the care of AVWS, according to the Toronto Wildlife Centre.

“(Urban 23) was tracked and located inside a construction yard. He was tucked away under some waste rubble, where he had taken shelter to get out of the heat,” officials detail. “Once approached, he came out of his resting spot. He then paused to assess who was there. During this pause, a dart with a sedative was deployed and within minutes he was immobilized.”

Executive Director of AVWS Linda Glimps says the coyote will be used as part of the sanctuary’s guided tours, which are designed to educate the public on the negative impacts human interference has on wildlife, which includes feeding them. “It saddens us to know that this outcome was entirely avoidable,” she goes on to say.

“Some might consider this a happy ending, but we think the whole situation is just so sad,” Executive Director of Toronto Wildlife Centre Nathalie Karvonen says. “This coyote’s whole life has
been changed, his whole future as a wild animal taken away, by the thoughtless and selfish actions of the people who refused to stop feeding him.”

The wildlife centre has been part of a large-scale effort to resolve the situation with coyotes in Pine Hills Cemetery in Scarborough and the area around it. The team there has been working with other Toronto-area organizations to attempt to educate residents and identify and limit the food sources for coyotes in the area.

Despite that, officials say people have continued to feed the animals – especially in the cemetery. “One person was even seen walking past a sign that warned of the dangers of feeding, with food in their hand for a coyote,” a statement from the Toronto-based centre reads.