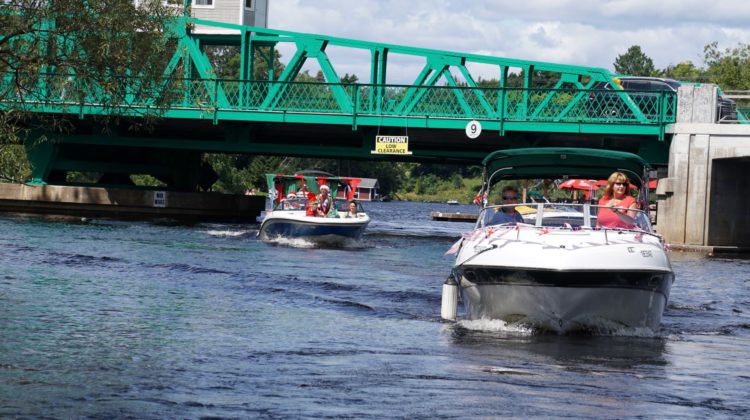 A poker-themed boat rally in Huntsville raised $56,366 for the Huntsville Hospital Foundation (HHF).

Organized by Lake Vernon seasonal residents John and Tracy Di Cesare, the Joker’s Wild Poker Run had 25 boats leisurely making their way across Lake Vernon, Fairy Lake and Peninsula Lake on Saturday. The event featured five poker stations across the lakes, where participants drew cards to add to their “hand.”

The participants with the top three hands won cash prizes of $3,000, $1,000, and $500, respectively. Each of the winners promptly chose to donate the money to the foundation.

Event organizer John DiCesare says the funds raised blew past the initial expectation of $40,000, and that everything about the event was “tremendous.”

“It was a tremendous day, everyone had so much fun, the weather cooperated, we raised a ton of dough for our hospital, just an all around tremendous event,” says DiCesare.

Each participating boat had to pay a registration fee of $1,000. The event was also sponsored by a number of businesses, both big and small. The day was rounded out by a $10,000 surprise donation from local metal recycling company All Ontario Recycling.

According to DiCesare, the goal was to bring people from all over the region together to rally behind a common cause.

“We wanted to ensure that it was inclusive for both permanent residents and seasonal residents, and see if we could bring everyone together during this pandemic that we’ve all been going through,” says DiCesare. “We really are all on the same team, and if we can come together behind something like our local hospital, regardless of where we live, it’s better for everyone all around.”

According to HHF Development Associate Natasha Nieder, the money will go towards diagnostic equipment for the Huntsville Hospital. She says the organization is overwhelmed by the support.

“The foundation is so grateful to John and Tracy for hosting this event, it really does take the support of the greater community to acquire the technology our hospital team needs,” says Nieder. “The event was so successful, we’re already discussing having it again next year.”

DiCesare says he’s already been contacted by people in Lake of Bays who are interested in expanding the event to their area, and plans to meet with them early next year.