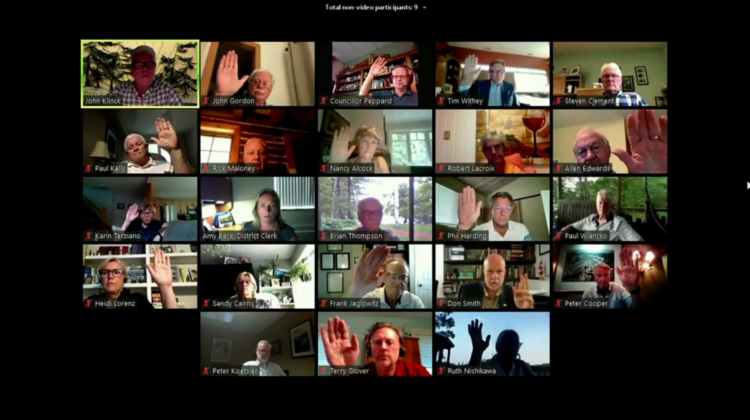 UPDATE: At a special session on Aug. 26th, council approved the line of credit, as well as a letter of support to the province on behalf of the SMDHU.

Frustration with the Ministry of Health was the theme of the day as Muskoka District Council met for its August meeting. Council approved a $900,000 loan for critical repairs at Fairvern Nursing Home, and deferred a resolution to form a $5 million line of credit to fund the Simcoe Muskoka District Health Unit (SMDHU).

Much of the virtual council meeting expressed anger about being left with the responsibility of providing the emergency funds, although none was directed at the leadership of the nursing home. Instead, councillors criticised the Ministry of Health for its failure to adequately fund long term care homes.

The $900,000 will be used to repair the heating, cooling. and HVAC systems for Fairvern, as well as other “key systems,” according to John Wright, Chair of the Fairvern Transition Committee. Wright says the funding granted by the Ontario government in November of 2020 is not enough to complete the repairs. The approved funds will be a loan from the District and will be accompanied by an application to the Ontario government to reimburse the funds.

“This is a [funding] model that is absolutely ridiculous, and I’m gobsmacked that this is how we’re supposed to manage and actually treat vulnerable seniors,” said Councillor Rick Maloney. “I’ve seen better financial models and funding models with local theatre companies, and we’re dealing with senior citizens here… If there’s ever a model that needs to be fixed, this long term care model absolutely needs to be addressed.”

District Chair John Klinck proposed changing the resolution to mention that the province repaying the funds was not certain. Several councillors argued against the idea, as it might shift responsibility off the province.

“I don’t want to give the province an out, I think it’s important for us to say it will be returned, and that’s our expectation,” said Councillor Ruth Nishikawa before being interrupted by a dropped connection.

The resolution was amended to place the onus to repay on the province, as suggested by Councillor Frank Jaglowitz. Council then voted unanimously in favour of the resolution.

The vote was less unanimous on a resolution to form a line of credit with TD Bank to make up more than half of the SMDHU’s $9.5 million in COVID-19 related costs. The Ministry of Health confirmed only $4.4 million in funding for the health unit, leaving the District to foot the bill for the other $5 million. Council voted 14-7 in favour of deferring the resolution.

Councillor Phil Harding proposed deferring the vote on the grounds that striking down the resolution in its current form would prevent Council from revisiting the matter for several months. Harding said it would be wiser to defer to consult with other municipalities and gather more information before making a decision.

“I agree that no one should go unpaid, but once we agree to this, we lose theoretically all of our leverage against the province,” said Harding. “I think we all need to be united in this, and push back a little bit.”

Harding also urged his fellow councillors to lobby the provincial government for answers on why it is not sufficiently funding the health unit, and called for an inquiry into whether this problem is systemic across all health units in the province or solely affecting SMDHU.

Councillor Clement, Chair of the Health Services Committee, voted against the deferral.

“I think if we were to bring a deferral, the Ministry would say ‘no, we’ve paid our dues, the rest is up to you,’ what are we as a district going to do? We’ve talked about this all afternoon, and we don’t agree with it, but in the long run it’s our responsibility to make sure that the [SMDHU] is here serving us,” said Clement. “In the long run, if [the Ministry does not pay], I’m sure we’d be put on the hook anyways, so let’s hope for the best and show our support.”

The resolution on SMDHU funding will be revisited at either the September Council meeting or a special session before the regularly scheduled meeting.