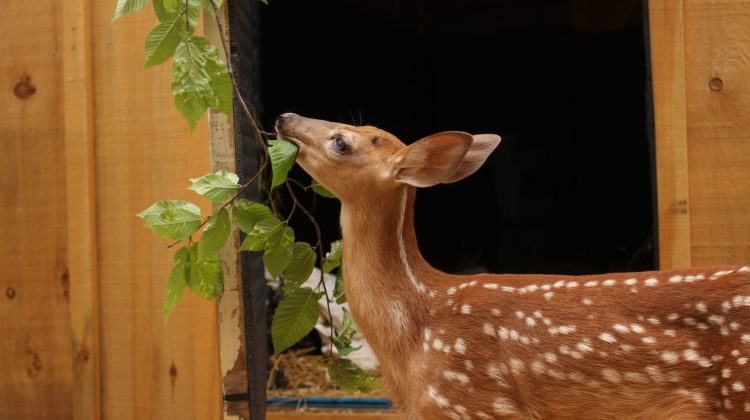 One of the orphaned fawns that are cared for by staff as the Aspen Valley Wildlife Sanctuary (Photo supplied by: Alison Withey)

“People don’t realize that, especially because they see it as a one-off,” she says. The side-effects of giving a goose a piece of bread might not be noticeable right away but happen over time. Kingshott explains wildlife that are frequently fed by humans will gradually stop fearing us. “They have a healthy fear of humans,” she explains. When that happens, it means they’re more prone to being injured or killed. “Animals begin to rely on that artificial food, so if it’s taken away from them they can starve or they can become aggressive because they’re looking for that food that people were giving them,” she goes on to say. It’s also possible that word spreads amongst the animal kingdom and they start to gather in the areas where humans are known to feed them.

In some cases – like with deer, for example – feeding them could lead to malnourishment because they’re used to a specialized diet. “Malnutrition is the inadequate intake of any of the required nutrients and can occur even in wildlife that is being fed large amounts of food,” Kingshott explains. “Deer have sensitive digestive systems that cannot readily adapt to supplemental food sources. Deer have actually died of starvation with full stomachs because their digestive systems were unable to process the supplemental food.”

While it may seem like an animal might need the food, Kingshott is confident they don’t, pointing out that nature will take care of them. With that being said, she says if you do spot an animal you think is injured or needs extra care, call the sanctuary to discuss what can be done.

In cottage country, it’s common to walk along a path and see squirrels or birds walking close by. Kingshott says there’s a difference between that and rewarding an animal for coming up to you. “Animals that are used to us walking around and leaving them alone and not really interfering in anything they’re doing, that’s not a bad thing,” she explains. “But when animals are being rewarded for approaching us, that’s where the problem lies.”

“People are feeding wildlife because they care about the animal,” Kingshott acknowledges. She says this campaign isn’t about shaming or blaming anyone for the negative effects feeding wildlife has, but more about educating people on the consequences of what is thought to be a harmless act. “It’s an indirect way of harming animals,” she adds.