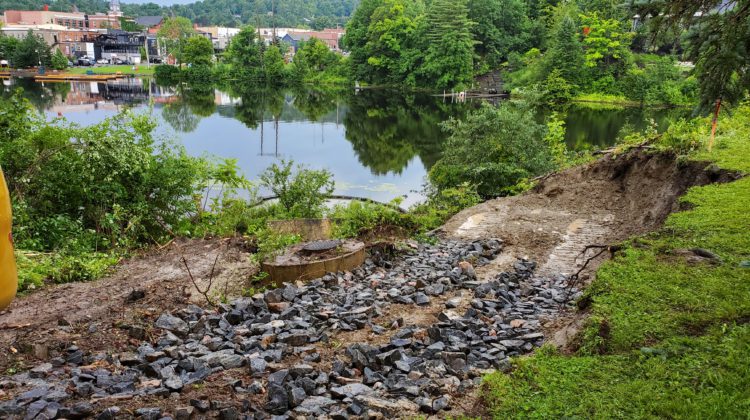 The outfill at John St. and Elm St. in Huntsville (Photo taken by Martin Halek)

Crews in Huntsville are working to get the Town’s storm sewers fully operational after significant rainfall.

“We’re dealing with washouts all over the municipality right now,” says Director of Operations and Protective Services Steve Hernen. “We’re not even caught up from the weekend and already we’ve been hit hard again.”

Hernen says a study of Huntsville’s drainage systems outlined several outfalls into the river that were in need of clearing or repair. East Waseosa Lake Road has reopened following a major washout, although work is still ongoing. Williamsport Road remains closed for culvert replacement. A new culvert has been installed and crews have started the process of backfilling the hole, to be completed within the next few days.

Crews are also working to repair the outfall at John Street and Elm Street. According to Hernen, the overgrowth is being cleared to allow workers to expose and replace the pipe, which is expected to be done within the next few weeks.

As heavy rainfall persists, Hernen says that any issues in the drainage system are making themselves known and are being fixed.

“This is the time where if you’ve got a plugged culvert, it shows up in a hurry, and we’re working on all that kind of stuff,“ he says. “We just ask the public to be patient, drive a little slower, take care, and if you’re going to pull off to the side of the road, make sure you’re not doing it into a washout.”