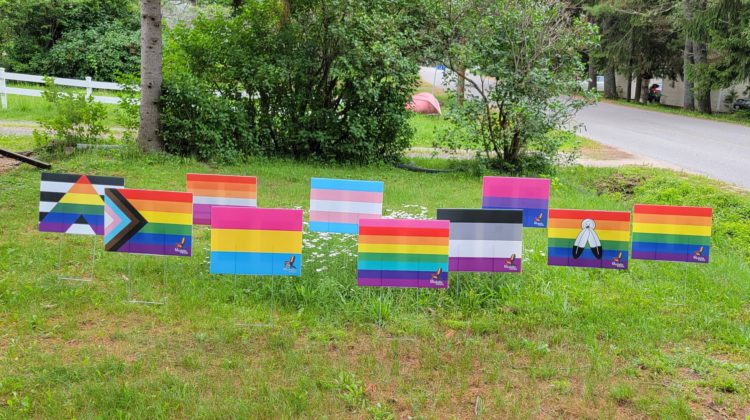 Various versions of the rainbow flag can be seen throughout Muskoka - including at all six municipal town halls (Photo credit: Muskoka Pride on Facebook)

The organizer of Muskoka Pride Week says for those who are struggling with their identity, seeing the Progress Pride flag flying in their municipalities is one of the most important symbols that we could have in Muskoka. 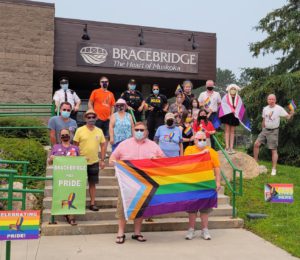 The Town of Bracebridge has raised a version of the rainbow flag every year since 2011 (Photo credit: Muskoka Pride)

Muskoka Pride was set up in 2009 and for the past few years, all six municipalities in the District of Muskoka and the Wahta First Nation have flown some version of the rainbow flag. However, Shawn Forth says it took years to get to this point. The first flag raising happened in 2011 in Bracebridge, with Huntsville and Gravenhurst following the next year. Forth says the holdup was that most municipalities had never been asked to fly a flag at their municipal offices. He adds it took a few years of “political maneuvering” to help “build that visibility.”

“I’m very proud that I was part of the process in making that happen,” Forth says, pointing out there have been many members of Muskoka Pride past and present that helped get to this point. “I certainly don’t take all of the credit.”

With 2021 marking the 10th year a version of the rainbow flag has been flown in one or all of the municipalities in Muskoka, the importance isn’t lost on Forth. “Especially for some of our youth and for the community members that feel isolated in the small rural areas,” he says, adding that every time they raise the flag, they have an “amazing reception.”

“The annual Muskoka Pride Week events have been a highlight in Muskoka each summer, which is a clear testament to all of the hard work of the Muskoka Pride committee, volunteers and to the support in our community as we celebrate diversity,” Mayor of Bracebridge Graydon Smith said during yesterday’s ceremony in-town.

Over the past five to 10 years, how young people talk about their sexual and gender identity has changed. Forth says young people are coming out earlier and using a different vocabulary to talk about themselves. At one of Monday’s flag raisings, a family brought a flag that he didn’t recognize. It was the Genderqueer flag, which was created in 2014. Forth says that’s a sign of progress. “That’s where the awareness has reached in our community,” he adds. “It’s fabulous.” 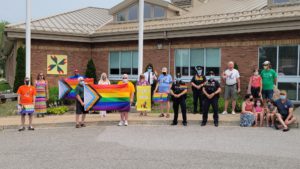 That feeling of isolation has only be heightened for some during the COVID-19 pandemic, making Muskoka Pride Week even more important. For members of the LGBTQ2S+ community to know the government officials in their community support them goes a long way.

“We need to be inclusive of everyone,” Muskoka Lakes Mayor Phil Harding said. “We are all one, we are all equal.”

“Under the rainbow umbrella, people who identify as straight or cisgender aren’t part of the rainbow community, but they are certainly some of our most important advocates,” Forth says. That includes parents supporting their children when they come out, or friends being there to support their friend who might be struggling with their gender or sexual identity. “It’s important for everybody to recognize that these are the values that our communities hold true,” Forth says.