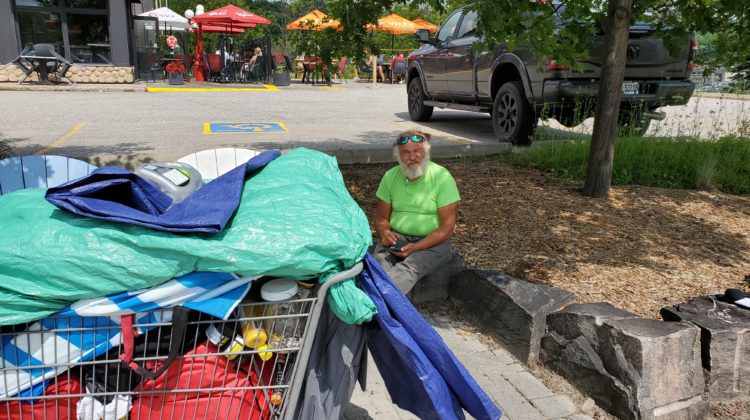 After living in Montreal for more than 40 years, Victor Bitton decided to pack everything he had into a shopping cart and walk more than 4,300 kilometres to Vancouver.

Bitton moved to Canada from Morocco with his family at age 12. When the COVID-19 pandemic started, he decided he’d had enough of Montreal. After relocating to Ottawa for close to a year, Bitton started his journey.

Departing from Ottawa at the start of June, the 55-year old walked more than 200 kilometres on the side of the road, hitching a ride to Huntsville after passing through Barry’s Bay. He says people have been very kind to him along the way, offering money, food, and accommodation.

Many people have also offered him rides, but he has turned down all offers except one, accepting because he had met the driver in town. Bitton says he turns down the rides for a few reasons: most vehicles cannot accommodate his 200 pound fully-loaded shopping cart, he wants to get in shape, and drivers giving rides to hitchhikers are “too talkative.”

“I don’t want to talk on the road,” Bitton says. “When you hitchhike, it’s always talking.”

Bitton says the only problem he’s encountered on the road so far was a steep hill in Huntsville where his shopping cart got away from him. He says he’s not worried about the road ahead.

“I don’t think about the negativity in a road like this,” he says. “If an accident happens, I won’t know that, you can’t plan [for] an accident, unless you’re planning it.”

Bitton says that he chose Vancouver because “there’s no winter there.” When he reaches Vancouver, he says he plans to spend some time in British Columbia’s forests. Until then, he says, he’s taking life as it comes.

Bitton says he plans to leave Huntsville soon, heading north to Parry Sound, followed by North Bay. After that, he continues the long journey west to Vancouver. He says he’s not in a hurry.

“I’ll take it easy, nothing is rushing,” he says with a laugh. “I just hope it won’t take the five years I was thinking.”