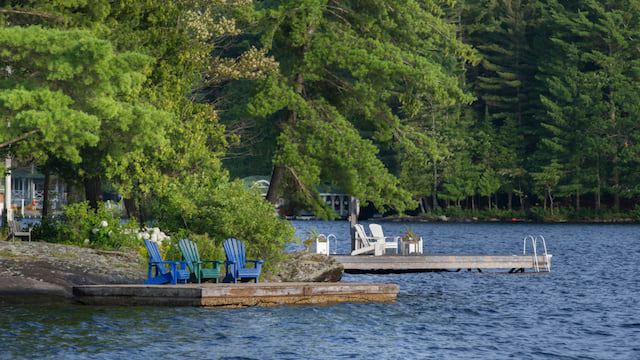 Government officials are working on getting Muskoka water levels back down after heavy rain.

The Ministry of Northern Development, Mines, Natural Resources and Forestry (NDMNRF) issued a water safety statement for the Muskoka River watershed Thursday. It is currently removing logs from the Bala Dam to release excess water, according to Muskoka Lakes Mayor Phil Harding.

“The last week of June, first week of July, we’ve had over 200 millimetres of rain; that is more than June and July combined, traditionally,” says Harding. “Our watershed, unfortunately, cannot manage these extreme droughts or extreme precipitation.”

According to Harding, some citizens have voiced concerns that the dams are not being opened to full capacity to release water. He says that a full release of the Bala Dam and Hydro plant at the same time would flood properties along the Moon River. Harding says choke points in the Muskoka River might need to be widened in the future to help with the release of water, and water reserves might need to be created in case of a drought.

“When you factor in climate change, we certainly are experiencing greater severity of weather,” says Harding. “This spring, we saw three months of drought conditions with about 40 per cent of traditional rainfall. The past two weeks is the inverse, because we’ve had five times the amount of normal rainfall.”

Harding says officials in Muskoka have been working with provincial officials to discuss the watershed’s management, including Ontario Premier Doug Ford.

“One thing I do appreciate is that Premier Ford has taken a greater interest in the Muskoka River water management plan,” says Harding. “He and I have had numerous conversations, and he’s directing his ministries to investigate changes to our water management plan to address the issues of flooding or drought. We certainly have a far better working relationship in the last twelve months than we have had in the past 10 or 15 years.”