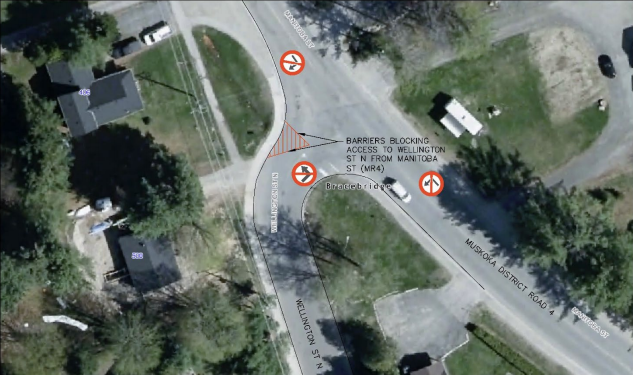 A three-month trial traffic calming improvement project is being done on Wellington Street North from Tuesday, July 6th until the end of September.

Bracebridge’s Director of Public Workers Geoff Carleton says this is being done to reduce the amount of cut-through traffic that’s generated and to provide better traffic flow for people that live in that area.

During the three month period, the north end of Wellington Street North will be closed, which will eliminate southbound movement from Manitoba Street and making it so you will only be able to make right-hand turns when exiting the street.

Carleton says signage will be posted in the areas where the project is being done.

The trial follows a 2020 traffic study report on the stretch of road that was done from June to November. It was done because of residents’ concern with the speed of cars driving down the road, stop control disobedience as well as the sheer volume of traffic coming through the road. “The review of the traffic data determined that the increased traffic flows on Wellington Street North were from cut-through traffic, which can be defined as traffic that utilizes other roadways to bypass other roads, traffic congestion or as short cuts,” Carleton says. ” The data shows a direct correlation between southbound traffic and volume during the day periods where the data was collected. These counts are significantly higher than correlating northbound traffic, concluding that the  increased traffic flow is related to cut through traffic.”

If the trial run is deemed successful by town staff and “changes driver expectations and expieince in a positive manor,” Carleton says the changes will be made permanent.