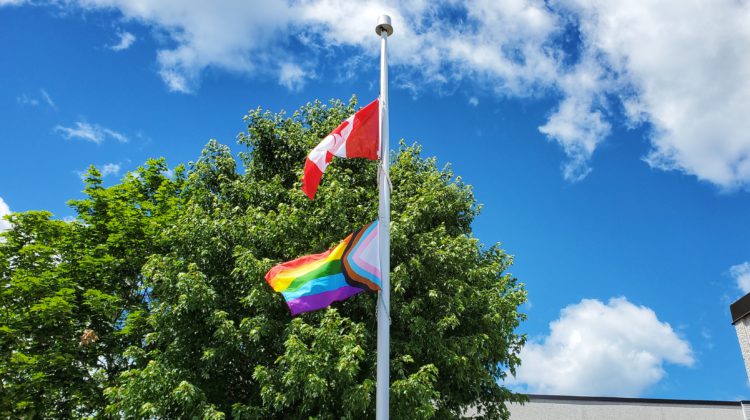 The OPP is investigating a potential hate crime after a Pride Flag was taken down and burned at Huntsville Public School.

A video showing several youths climbing the flagpole and burning the flag was circulated over Snapchat and Instagram earlier this week.

Shawn Forth, secretary of Muskoka Pride, says the incident was disheartening.

“My reaction was disbelief, then frustration and anger, to realize there are people in the community that want to show disrespect to others in the community,” says Forth. “As an elementary teacher, and someone who’s grown up in Muskoka, I understand the homophobia that exists in Muskoka, and the lack of exposure to different marginalized groups.”

Kate McKay with the Huntsville OPP says the investigation is being taken very seriously.

“Due to the level of severity, especially with this incident being a hate crime due to the burning of the Pride Flag and everything it stands for, we are tackling this investigation with lots of resources, and it’s being taken very seriously,” says McKay.

McKay says all youths involved in the incident have been identified but have not yet been taken into custody. Non-violent hate crimes can result in a prison sentence of up to two years in Canada. Under the Youth Criminal Justice Act, charges will likely be lowered.

In an emailed statement, the Trillium Lakelands District School Board (TLDSB) condemned the act:

The statement added that the progress pride flag is currently being flown at all TLDSB schools during Pride Month, and that students or staff affected by the incident can receive support through their school.

Forth says he’s been impressed by the speed and seriousness with which the incident has been handled.

“It’s extremely disappointing, but I’m really glad with the response we’ve seen that it’s being taken seriously by both the school board and the OPP, that very quickly a new flag was put up,” says Forth.