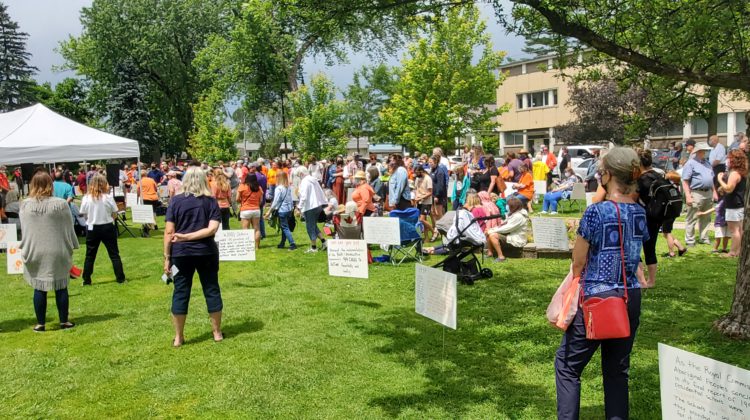 Hundreds showed up at Memorial Park in Bracebridge for the ceremony (Photo credit: Mathew Reisler)

There were hundreds of people from across Muskoka that attended a ceremony in Bracebridge’s Memorial Park to honour the 215 children whose unmarked graves were uncovered near the grounds of a former residential school in Kamloops.

“It took the 215 spirits to allow their graves to be found,” residential school survivor Lila Tobobondung told the crowd of hundreds. “And guess what? This time when the cries of those 215 children sounded it was heard across the world. This time people stood still and paid attention.”

She began her speech by thanking young people for being open-minded and willing to listen. “They’re the ones that are going to honour us,” she said. “If there’s any honouring to do for us, they are going to be the ones to do it.”

In a lighthearted moment, a young girl in the crowd said “thank you” after Tobobondung thanked the youth for being open to learning.

Now, Tobobonung said, the 215 spirits are calling on us to ask questions. “Why did we die?” she asked. “Why were we left in unmarked graves? Why do we still hear the clash of worldviews that sounded at first contact? Why are our governments still fighting people who are trying to help our children? Why are our children still being made to suffer? Why do we leapfrog over truth and think that we can just slide into reconciliation?”

Organizer Trisha Cowie also spoke during the event, saying that while this gathering is a good start, the conversation needs to continue. “Even though some time has passed, that still affects me and I know it still affects many people who are here today,” she said.

Memorial Park was decorated with reused election signs with messages like “every child matters” and “no more silent tears” written on them. Other signs had longer messages citing statistics about residential schools.

Cowie, who is a member of the Hiawatha First Nation, said the weeks leading up to this memorial have been “very emotional” but said it was “wonderful” to see everyone together. She finished her short speech reminding people that there is more that needs to be done, citing the 94 calls to action written by the Truth and Reconciliation Commission on how Canada can change its relationship with the Indigenous peoples.

Traditional Elder Doug Pawis also spoke during the memorial. He said we need to stand together, regardless of background, as one without racism and prejudice. “To do that we have to recognize each other and get acquainted and become more open and not be scared of one another,” he said.

“We all must stand together as one,” Pawis finished.