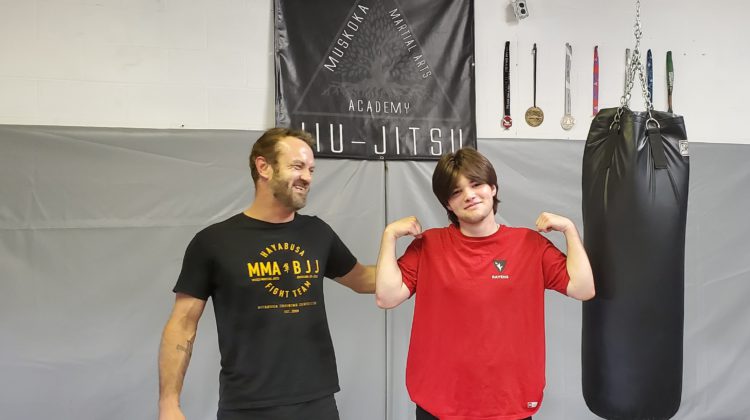 Dan Thomas with one of his students, 15-year-old aspiring UFC fighter Porter Page

A local martial artist is fighting both metaphorically and literally to keep his business open.

“Basically, Kyle’s going to beat me up and help me raise some money to save the club,” says Thomas. “Any money that I do raise to help with the overhead and stuff here I’m going to donate back to any kids that can’t afford the membership fees, then we can give something back to the community by helping the gym stay afloat.”

The club offers classes in kick-boxing and Brazilian jiu-jitsu for both children and adults. It has been closed to the public since the start of the COVID-19 pandemic, but does not qualify for business relief funding.

Thomas is currently only able to continue training for a handful of competitive fighters, but hopes he can open regular classes soon. He says the skills that kids learn with martial arts help them not just physically, but mentally and emotionally as well.

“When you’re going for your first job interview, you’re not going to be quite as nervous, because you’ve trained in that fight or flight kind of atmosphere,” says Thomas. “Another important thing is socializing kids outside of the community; tournaments do that a lot where it brings your kids to meet others doing similar stuff but are from other cultures, religions, political views.”

Thomas says that while keeping the place open has been a struggle, he’s been able to continue thanks to the generosity of the building’s landlord and the local community.

“I don’t think we’ll be going anywhere, I’ve got too much support from the community,” says Thomas. “I don’t think the community would let this place go away, because the kids have a great time here, and a lot of the parents too.”

Thomas has been involved with martial arts for close to 40 years, having done boxing since the 1980s, kickboxing since the 1990s, and jiu-jitsu since the 2000s. After being injured at work, Thomas opened the Muskoka Martial Arts Academy.

“[I] had a bad back injury, was about to go on disability, and I decided to open a gym, because that’s the smart move, right,” he says with a laugh.

After knowing Nelson for more than 15 years, Thomas says the professional fighter offered his help when he heard the club was struggling. He says he doesn’t feel “too bad” about his odds.

“I’m pretty confident Kyle won’t kill me,” he jokes. “Who knows, I’m pretty sparry for an old man, and I’ve been doing this for a long time.”

The fundraiser match will be streamed over Facebook Live on June 26 at 2:00 p.m.. The fundraiser package costs $200 and comes with an autographed pair of boxing gloves, as well as a one-in-five chance to coach Nelson during the match.