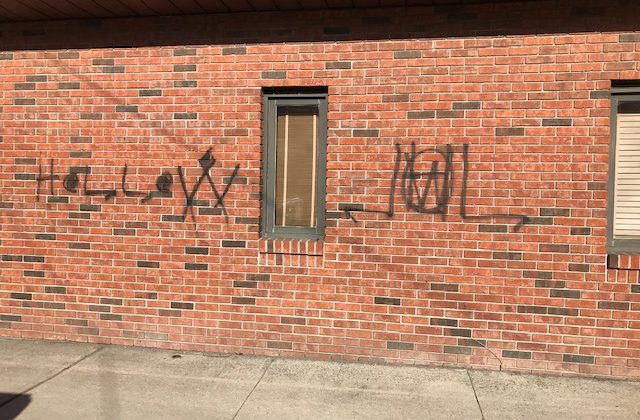 The Downtown Bracebridge Business Improvement Area (BIA) is covering the cost to remove the nearly 50 graffiti tags that were scrawled on some buildings downtown.

“The downtown businesses were struck pretty hard towards the end of April with tagging,” the BIA’s Administrative Coordinator Tracy Larkman tells the MyMuskokaNow.com newsroom. She says the majority of the tags were done within one week.

With the BIA not running most of their events this year, Larkman says they decided to lend businesses a hand and cover the cost of the removal. Goodbye Graffiti has been brought in to do the work. She says it will cost the BIA around $4,000, but they will only be able to get the lower-level tags. “There’s not a huge amount on the upper levels,” Larkman adds, saying it will cost too much. On Monday, she estimates 35 tags were washed away, with six more expected to be removed Tuesday.

“Usually with tagging, if you remove the tags, it’s less likely they will return to the same spot,” Larkman says, but adds that doesn’t mean it won’t happen again.

The removal process involves the company putting a clear coat over the spot that was vandalized that makes it easier to remove future tags. “It shouldn’t affect chalk art,” she adds, specifically mentioning Marie Bowman who is known to draw on the wall just past the train tracks on Taylor Road. “(The BIA’s) goal is to keep our downtown beautiful and vibrant for people to come and visit,” she says. Bracebridge council created a Public Art Advisory Committee in April, which Larkman hopes will help them with that goal.

“We just want to make our downtown pretty,” Larkman goes on to say. “We’re not looking to destroy anyone’s chalk art. We’re looking to make it more vibrant and I do hope the chalk art will return”