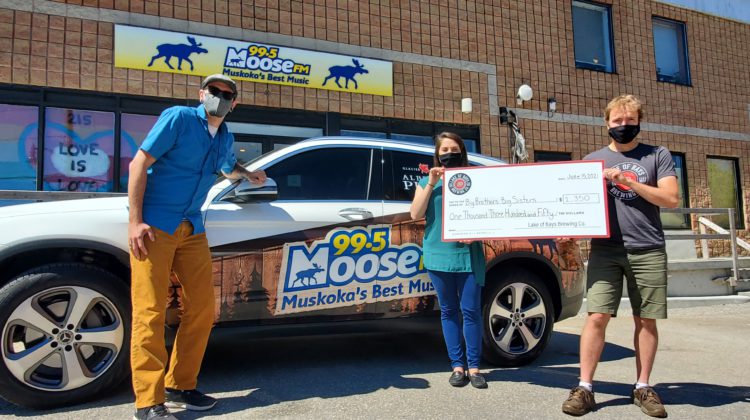 The partnership between Lake of Bays Brewing Company and 99.5 Moose FM raised $1,300 for Big Brothers Big Sisters of Muskoka (BBBS).

Owner of the brewery Darren Smith stopped by the Moose FM station on Taylor Road to present BBBS Executive Director Chrissy King with the cheque. “We know they do great work with children,” he tells the MyMuskokaNow.com newsroom. “We know there’s a lot of need for that right now.”

King says the money will be put to use right away. It costs around $1,500 per little, per year. “When we create a match, it’s not an instantaneous thing,” she explains. The process involves interviews and background checks. Once that’s done, King says the team will continue to support the matches. “It will help, number one, make our matches,” King says of the donation. “But also keep them strong and make sure that they are connecting and creating a developmental relationship that helps this child develop into a stronger person.”

“We’re so thankful,” King says, adding they’re only able to operate thanks to donations from businesses, the community and through grants. “We are an extremely small agency, so when we are running our own fundraisers it takes a lot of our time,” she says. When a business like Lake of Bays gets on board with organizing a fundraiser, it makes their life easier because they can shift their focus back to the littles.

“It also helps us reach people who we might not be able to reach,” King says.

Smith says the program will continue this year. “People loved it so much last year, we figured if it ain’t broke, don’t fix it,” he says. Moose is Loose lager is available to buy on Lake of Bays Brewing Company’s website.