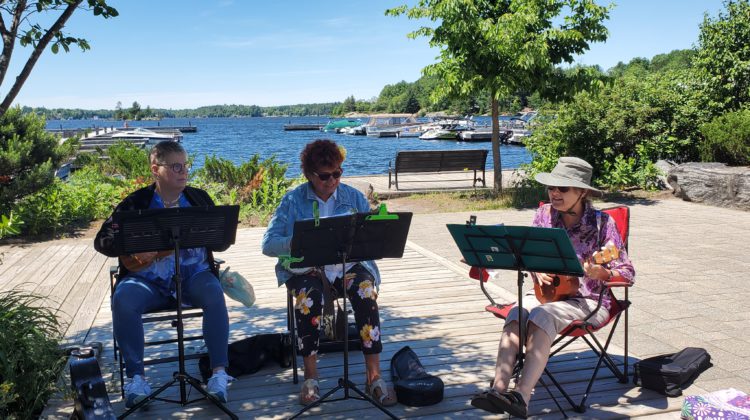 The Gravenhurst Treble Makers play songs of their ukulele at least once a week at the Muskoka Wharf (Photo credit: Mathew Reisler)

As a way to get some practice playing the ukulele – and brighten people’s days – four ukulele players have decided to play weekly concerts at the Muskoka Wharf.

“I started to come down by myself and I really enjoyed it,” Sandi Manser tells the MyMuskokaNow.com newsroom as she set herself up for Tuesday’s concert. While she enjoyed playing on her own, she couldn’t help but think it would be much more fun to have some bandmates, so she invited her friend Marc Mantha, who then invited Sylvie Maxwell. “It involved from there,” Manser says.

Manser, Mantha, Maxwell and Wendy Pries have been playing at the wharf for about a year and a half.

Pries got involved three weeks ago thanks to the ukulele group the four are a part of. She explains that during a meeting a few weeks ago, Manser brought up the band and Pries jumped at the opportunity to play with them. She showed up for the first time last week. “It was so much fun,” she says, grinning from ear to ear. What’s great, she says, is how there’s no pressure, adding they’re all just out there for the fun of it and to make everyone who walks by smile.

Manser jokes that she’s happy there is no pressure so they don’t have to worry about any people walking by throwing rotten tomatoes at them.

Maxwell says last week, thanks to the ice cream shop they play next to opening up, there were lots of kids running around. “They were dancing and smiling,” she says about the children. “It was lovely. It was nice seeing the children laughing and trying to dance.”

She adds that with the Wharf being such a beautiful, picturesque place to be, they often get small gatherings of people stopping to listen for a few minutes.

The band doesn’t have a set schedule, Manser says. They just play when the weather is nice and everyone’s schedules line up, but they do try to get out at least once a week. She says they try to play “toe-tapping” songs people will recognize. One of the songs on this week’s playlist is Creedence Clearwater Revival’s “Bad Moon Rising.”

“People seem to like it,” she says. Between the dancing kids and the smiles they see on the faces of the parents and other adults that walk by, Manser says the experience has been great. It’s given her and her bandmates a reason to get out of the house and it makes them feel great knowing they’ve had a small part in making someone’s day a little bit better.