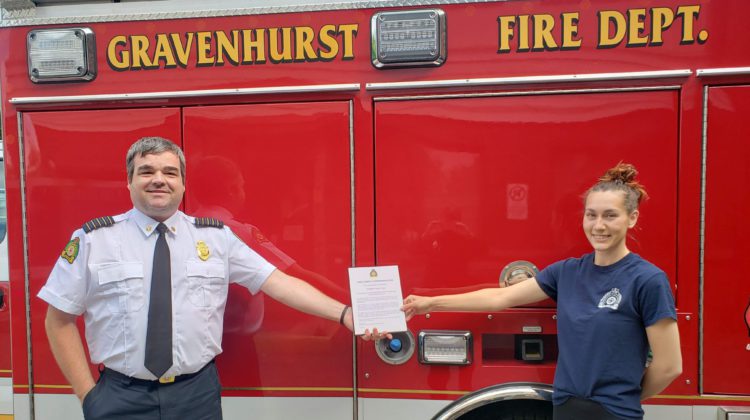 A volunteer with the Gravenhurst Fire Department has been awarded the Fire Chief Commendation for saving seven people trapped in an SUV.

Volunteer firefighter Aysha Tryon and her partner were driving along Southwood Road on May 2nd when they were passed by an SUV going well over the speed limit. “The vehicle has passed us at excessive speed on a hill,” Tryon explains. When they got to a bend in the road, she says they lost control and smashed into a tree. That’s when Tryon and her partner jumped into action. Before they even got to the scene, she was on the phone with 911. “As soon as we got to the vehicle, we were trying to get the vehicle open,” she says. Once everyone was out, Tyron put her expertise to use and cleaned the occupants’ wounds and made sure they stayed still until an ambulance showed up.

“When first responders arrived on the scene she acted as the liaison so she could help direct the paramedics to those that were most critically injured,” Gravenhurst’s Fire Chief Jared Cayley explains.

The award was started by Cayley’s predecessor Larry Brassard. He estimates 10 awards were handed out during Brassard’s term as the municipality’s top firefighter, with this marking Cayley’s first. “I think it’s a fantastic initiative,” he says.

Now in her fourth year as a volunteer firefighter, Tryon says she’s grateful to be recognized for the work she did. “It was just quick thinking,” she says about the situation, adding she’s just grateful everything turned out positively and the occupants of the vehicle are okay.

“I know for a fact that Aysha’s actions are not limited to Aysha,” Cayley says. “Her type of personality is what the fire service generally attracts. They put others before themselves.”

He adds that he knows from experience that firefighters don’t always like the attention that comes from being recognized for their work. In this case, he didn’t even find out about what Tryon did from her. Cayley says he learned about what happened through reporting in the media. He thinks that’s a testament to her character.