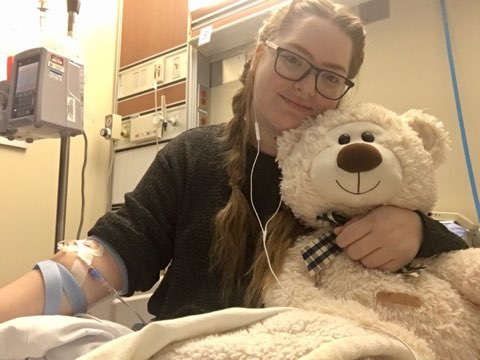 Kaitlin Saari spent around seven months in the Bracebridge hospital, and another month in a Toronto hospital after undergoing the surgery (Photo supplied by: Kaitlin Saari)

Bracebridge resident Kaitlin Saari is one of only two people in Ontario to have what is called a “super liver” after having the procedure done in Toronto.

She had just moved back to Bracebridge from North Bay when the issues started flaring up. Saari says she was experiencing discomfort after eating, which she chalked up to acid reflux and ignored it. After starting a new job in town, the issues started getting worse and she eventually had to go to the hospital. Her initial thought was that she had an ulcer.

“They told me it was pancreatitis,” she tells the MyMuskokaNow.com newsroom. “I had never heard of it before.”

The pancreas plays a vital role in digestion. It’s located in your abdomen, right behind your stomach and it is about the size of your hand. It creates pancreatic juices called enzymes during digestion that help to break down sugars, fats and starches. Pancreatitis is inflammation of the pancreas that could cause debilitating pain.

That’s what happened with Saari. When she was first admitted to the South Muskoka Memorial Hospital in Bracebridge she didn’t describe the pain as excruciating, but it did get worse when she was eating. The initial treatment involved not eating or drinking to give her digestive system time to relax. She was put on an IV and was later discharged because doctors felt she was in good condition. She didn’t eat anything solid for the next two months, with a diet consisting of just jello and juices. “They were just trying to get the pancreas to stop being inflamed,” Saari explains.

The diet change didn’t work, so more invasive procedures was needed. Doctors Rohit Gupta, Joseph Gleeson, and Rachel Greer were a part of the team that helped Saari during his six-month stay at the local hospital. “The doctors in Bracebridge were on it,” she says. By working tirelessly, the damage was limited to her body. “The longer you have pancreatitis, the more damage it does to your cells,” she explains. 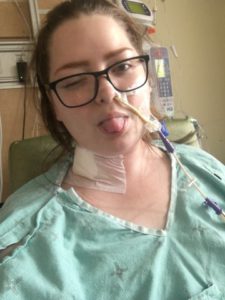 Throughout her journey, Kailin did whatever she could to stay positive (Photo supplied by: Kaitlin Saari)

“There were a lot of days that we were very afraid for her life,” he adds. While she was in hospital, Kaitlin missed spending Christmas and both of her parents’ birthdays. Donald says that was tough because he, his wife, Kaitlin and their son are a very tight family.

The next few months for her involved constant testing, blood work, CT scans, ultrasounds and an MRI in September. It was found that the ducts in her pancreas were slightly closed, so surgery was done to put stents in her ducts to help drain the fluid and expand them. She had that procedure done four times before a setback happened. “I think it was 10 days after and all of sudden I just had a huge flare up again,” Saari says. “I couldn’t eat, I couldn’t even move, the pain was so bad.”

This process was devastating for Kaitlin’s parents. Her father says they weren’t able to visit her in the hospital because of the COVID-19 protocols that were in place. “It’s something no parent should have to go through,” he says. “We’re supposed to go first, they’re supposed to look after us.”

“That wears on you, having to go through all of that on your own,” Kaitlin adds.

“Things were just not working when I was in the hospital,” she says. “There was no light at the end of the tunnel.”

With her pain medication needing to be upped and her continuing to not be able to work, Dr. Gupta told her about a 12-hour surgery that could be done at the Toronto General Hospital. It would be only the second time a surgery like this was done. “I didn’t think twice,” she exclaims.

The surgery involved removing her pancreas, spleen, half of her stomach and part of her intestines. “They have to completely reroute your digestive tract,” she explains. However, by removing the pancreas, patients become diabetic, so insulin is needed. The next step in the procedure helps with that though as the doctors isolate the pancreatic cell, before returning them to the operating room and injecting them into the patient’s liver where the cells take root and grow. Now, the liver is producing the insulin that the body needs to survive.

The elder Saari says Kaitlin got very lucky. “Toronto went into lockdown the night of her surgery,” he says. “Had she not had the surgery that day, she might still be waiting.”

He says the weight of the world was lifted off of their shoulders after she left the hospital. Donald says there were lots of tears shed over the eight months leading up to the moment she was discharged and came home.

Since leaving Toronto, her insulin dosage has been slowly reduced. Saari says she’s had minimal complications since returning home. She spent a few months with her parents but is now back to living on her own. She isn’t able to lift everything but can get in and out of her car and cook for herself.

“It’s been quite a ride,” Saari’s father says, adding it was “eight months of hell” but, thankfully, Kaitlin is on a good path now.

Now that she’s back on a “normal diet,” that includes one of her favourite foods – tacos. She often put ground turkey and lettuce on hers which, before the surgery, would cause her to flare up. “Last week I got to actually eat a taco and not have to go to the hospital,” she says. “Something like that is so thrilling and exciting that it just shows that I’m going to get back to the normal I was before.”

While the last few months have been a “complete fog,” things are improving for Saari. She hopes that in the coming months things continue to improve and she’s able to enjoy more and more of what a Muskoka summer has to offer.