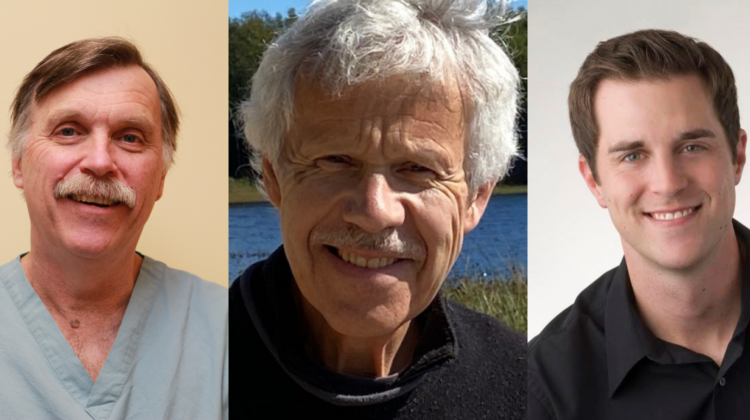 Three doctors in Muskoka have been honoured for exceptional service.

Dr. Roy Kirkpatrick and Dr. Malcolm Wilson of Huntsville, and Dr. Michael Mason of Bracebridge have each been awarded by different organizations.

Dr. Kirkpatrick, Huntsville General Surgeon, was awarded the Rural Specialist Merit Award by the Society of Rural Physicians of Canada. The award recognizes the long-term commitment of medical specialists who live and work in rural Canada.

“Members of the Society of Rural Physicians, in my view, are special people, because they have to provide top quality service to people in outlying areas, where they don’t have access to all of the infrastructure that somebody in downtown Toronto might have,” says Kirkpatrick. “So when a group of people like that recognizes you, that’s something you can sort of sit back and be very proud of.”

Kirkpatrick has been a faculty member at the Northern Ontario School of Medicine (NOSM) since its founding in 2005, and has done work with Doctors Without Borders, and the Canadian Red Cross.

Dr. Wilson has been given the title of Associate Professor Honorarius by NOSM. Although Wilson is no longer actively teaching, the school has given him permanent faculty membership and privileges. Wilson has practiced internal medicine in Huntsville for the past 30 years, and has held several leadership roles at Muskoka Algonquin Healthcare.

“Teaching has its own rewards, you garner respect from your colleagues and your students in residence that come up underneath you and train with you; I think that’s why you teach, it’s part of being a physician,” Wilson says with a laugh. “It’s nice to be recognized for the teaching that I’ve done, but I can assure you I didn’t do it in order to get the ‘Honorarius’ tacked on to the end ‘Associate Professor’.”

Dr. Mason was given the Professional Association of Residents of Ontario (PARO) Excellence in Clinical Teaching Award for his role in teaching medical residency students. Only one of these awards is given annually to each medical school in Ontario except the University of Toronto, which has three.

Mason says he was surprised to receive the award, and that he saw his teaching as a chance to thank NOSM.

“It was just a nice opportunity to come back, work how I wanted to work, which is to have a family practice plus work in the emergency department, and then also take on learners, namely family medicine residents at NOSM, but also to give back to the school which springboarded my opportunity to be a doctor,” says Mason.