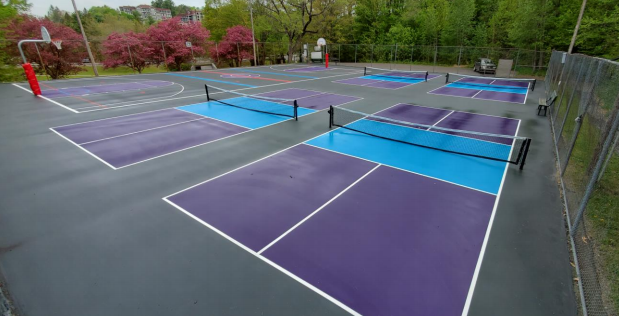 The multi-sport court at Kelvin Grove Park (Photo supplied by: Town of Bracebridge)

Kelvin Grove Park is now open after a month of construction on its new multi-sport court, and James W. Kerr Park will reopen soon to show off its new upgrades.

Kelvin Grove reopened on May 28th with four new pickleball courts and one combined basketball and ball hockey court available for use.

Within the next few weeks, Bracebridge’s Manager of Facilities Will Crowe says construction at Kerr Park will wrap up with four new tennis courts installed, one being overlaid with lines for pickleball. He tells the MyMuskokaNow.com newsroom the contractor is delayed because they’ve had trouble getting asphalt on-site, but says that problem should be solved by the end of the week.

As part of the work at Kerr Park, a three-tier hydration station will be installed, which will include a water fountain, bottle filling station, and a dog bowl.

The multi-sport court at Kelvin Grove and Kerr Park will both be open from 6 AM to 11 PM.

Manager of Recreation Services for Bracebridge Trish Conley-Knight says town staff worked closely with the Bracebridge Tennis Club for the work at Kerr Park. With the courts at Kelvin Grove getting repurposed, the club agreed to relocate to Kerr Park earlier this year. She adds that consultation work dates back to 2019 with feedback from the public showing that pickleball, basketball and ball hockey were the most popular choices for what to do with the former tennis courts at Kelvin Grove. A mini-putt course and a space for BMX biking were also high on the community’s priority list, according to Conley-Knight. She did not say if there are plans in the future to incorporate those two activities at either of the parks.

Bourassa Sport Technologie did the work at Kelvin Grove and Kerr Parks, with it costing $83,000 for the former and $90,000 for the latter.